Since the last Insights (end of Sep)

Well, well, well.  The regular, working people in rural America went to the polls this year and surprised everyone - even themselves.  They shocked the elite (both Democrats and Republicans alike).

It’s reasonable to say that the global financial markets were positioned for a Clinton win.  There is going to be a period of readjustment – and we’re currently seeing the “reset” play out.

There are a number of things we know, but there are many things we don’t know yet.

Depending on what side of the fence you’re on, let’s maybe come out of the “coping rooms”, or “put the pom-poms away”,  and just consider several things that are factual rather than marinating in the conjecture and hypothetical of the day.

In late September I wrote:

“Neither Trump nor Clinton will (on their own), be a catastrophe economically – the lack of tackling the structural issues confronting our country would be catastrophic enough.  …We’re likely headed towards cost-push inflation and stagnation against a backdrop of a government controlled Treasury market (which is THE risk-free pricing mechanism against which ALL global risk is measured), and this HAS to change.  The clinical and factual problem, is in fact, that Monetary Policy is a very blunt instrument.  And so while it can work initially in a blunt, disruptive, visceral manner, there are many, many, many times where surgical instruments are necessary rather than blunt tools.  That’s where the helicopter money comes in – they can be very, very surgical with it – they can target areas of the economy where they believe increases in spending will really move the GDP growth needle forward.”

“One of the things I think is very likely is that with the prospects of robust fiscal stimulus in response to voters mad as hell, the Fed is going to be in there with helicopter money.  In other words, they’re going to be buying whatever the Treasury issues.  They’re not going to, in effect, advocate strong fiscal stimulus and then not finance it.  And that’s helicopter money.”  Dr. Gary Shilling – former Merrill Lynch Economist – November 9, 2016

This was a reminder of why it’s not smart to try to time the market and try to be cute.  It goes without saying that you have to have a plan and then stay committed to your plan thru the periods of drama.

For example:  YTD thru January, BB&T bank stock was down 18% and it’s currently up YTD 16% (thru Nov 17th, 2016).   Now the mini-rally from November 9th is about out of steam I think personally, but it sure doesn’t mean that the Financials don’t have more room to run.

The credit markets believe that with the election we’ve turned the corner on deflation (the last several month’s signals looked rough up until), and it instead believes in the reflation trade.  We shall see.  I am skeptical.  The debt profile we have in this country and around the world and also the demographics in the advanced economies – both are very tough hurdles.  The Fed has roughly met their dual mandate (employment and inflation), for all intents and purposes.

This means rather full employment for this cycle and inflation above 2% per both the Cleveland Fed’s and the Atlanta Fed’s measures.  So the Fed certainly has a green light for December or early next year if they choose to go, but the strong U.S., dollar and tighter financial conditions have sort of done their work for them again.  That’s why they stayed their hand last September (2015).

“The dollar is soaring, financial conditions are tightening, and the Fed appears about to raise rates.”  Jurrien Timmer – Fidelity Institutional Wealth Services – November 15, 2016 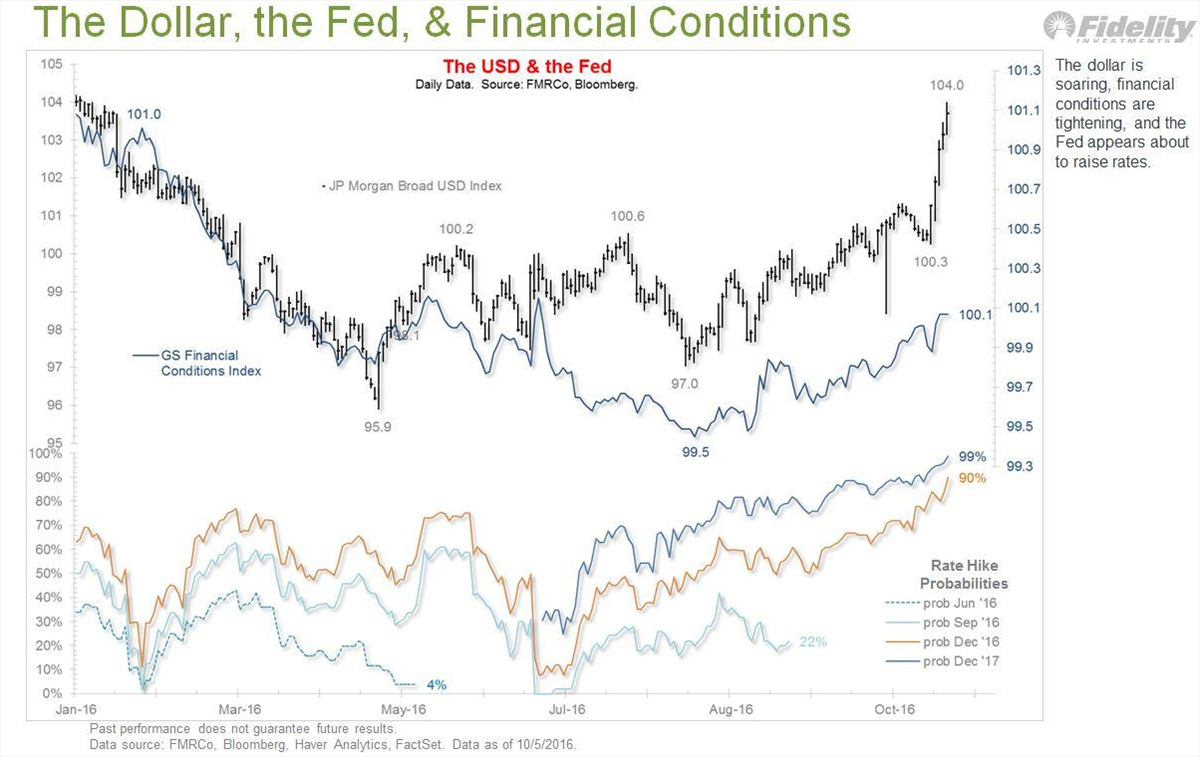 “…They’ve [The Fed] been crying wolf for so long that they’ve lost credibility and they feel like they need to.” – Dr. Gary Shilling – former Merrill Lynch Chief Economist – November 9, 2016

Room for Treasury yields to run

We could retrace all the way back to 3% on the 10 year (see chart below), and still only be back to Jan., 2013 levels, so we’ve definitely got room for increased yield volatility – no question.  But the fact is, is that there’s much more domestic and global pressure for yields to come back down rather quickly after this current spasm when you consider that the Japanese 10 year JGB yields Zero and the Bank of Japan is targeting their yield curve to keep it there and the German 10 year is at 15 bps or 0.15%.

The chart above is a chart of the 10 year U.S. Treasury bond yield (you probably guessed).

Please note:  not much spillover

It’s very important to note that during previous interest rate cycles since World War II, EVEN WHEN the Fed raises the Fed Funds Rate 100 bps or 1.00%, there has been only a 25 bps spillover effect on the 10 year yield; and only a 35 bps spillover on the 30 year yield.  Source:  Gary Shilling

The older I get, I find it easier to read things in larger print, so let me reprint what is written in small print on the chart above about which way yields may go from here.

There are parts of the municipal bond curve that are becoming very attractive now with this most recent yield spasm.  That’s positive.  I’m still uber-selective with corporate bonds however, because they’re still rather expensive overall – but credit spreads have been positive for said bonds’ prices (some exceptions).

How about one more yield spasm?

We’ve experience 15 yield corrections or “bond yield spasms”, only to stay lower range-bound or leg back down.  If we were seeing real sustained inflation instead of “faith” inflation in the reflation trade and if we were collectively making headway reducing and deleveraging debt in a meaningful way, I’d be more keen to say this is a sustainable uptrend in yields, but I don’t think it is.  Now, client portfolios are constructed in such a way that they perform well in a raising rate environment as well as if we’re stuck in a low, volatile and decreasing yield environment.  What I’ve learned over the years is to be and stay humble in this job because if you fall in love with your forecast, you’ll begin to believe your own thinking way too much and you can’t consider outside opinions that differ from your own.  Also, I am so fortunate to be able to have access to some of the brightest minds in our industry.

Politics in the rear-view mirrow (yes! U.S., election behind us – thank goodness)…whoops…here comes some more in the windshield (globally)…

Italy and Austria both have a constitutional vote and elections the first week of December.  Then, there is the French presidential election in April/May and then in August we have the German elections.  Remember what I’ve been saying about populism going viral?  Do you really think it’s reserved only for the U.S.?

Oh – and a jolly-old stock market rally in the U.K., must cure the hangover from that Brexit vote, too. You know, I had an international law in Economics class in 1999 taught by a really bright, young Harvard professor and he really did not like me because me and one other guy in our class continued to question his assumptions about the E.U.  You know, I am amazed at the number of people around the world that believe that the single currency Euro was written about in the Old Testament or something.  Before 1999, it was the Greek Drachma, the German Deutsche Mark, the Italian Lira, and the list goes on and on...

FACT about one other period of large, fiscal infrastructure spending program (but timing is important):

Eisenhower’s administration created the modern highway and interstate system and he built up the military complex during the Cold War and inflation was lower when he left office than when he took over.  In addition, average GDP growth rates were lower during his years than during Truman’s.  The stock market did have good years during Eisenhower's time in office.  It's really important to note,however, that he came into office during recession as opposed to coming in so late in the business cycle like Trump is.

Investments we’ve made this week 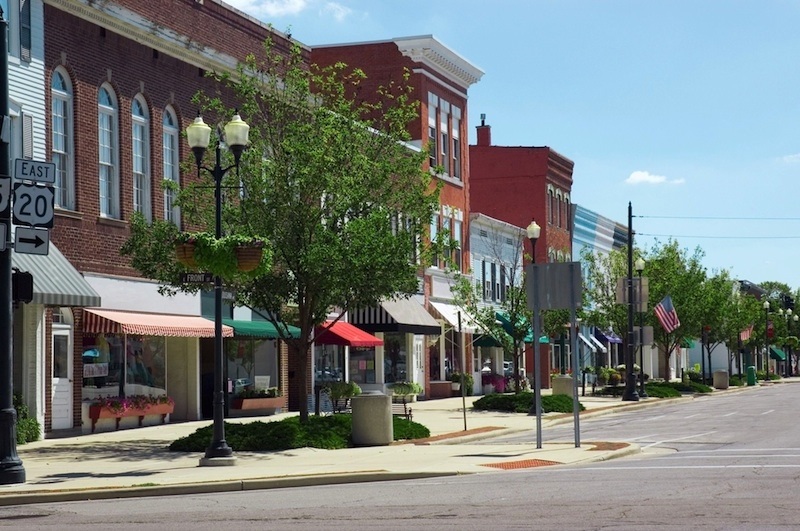 By way of short narrative, the man who put the deal together and who runs XPO is Bradley Jacobs, who successfully built and operated United Waste and later United Rentals. 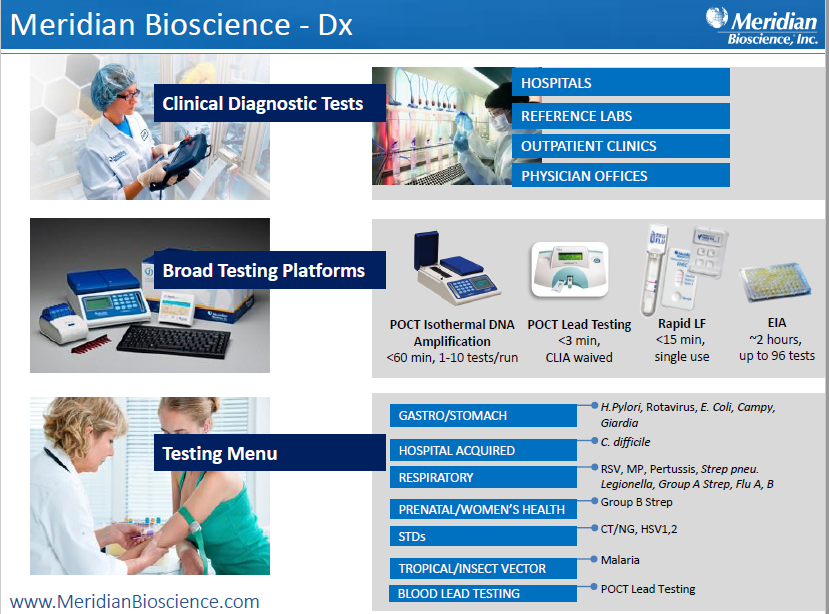 Since we’re closing in on Thanksgiving next week, I thought I’d do like the retailers and bring out the Christmas wish list ahead of schedule…

Let’s remember, that basically the only things that’ve happened so far with President-elect Trump are he’s naming his cabinet and he’s instituted a no-fly zone over Trump Tower (thus a wish-list and not a done-deal list)…

In closing, I know I speak for everyone at our firm when I wish you and your family and friends the absolute best Thanksgiving ever and a very Merry Christmas and Happy Holidays to you as well! 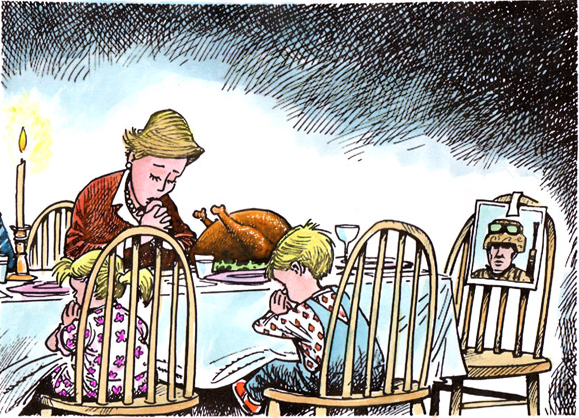