Greetings!  It’s been an interesting time to say the least economically and politically YTD in 2017.

2016 represented a strong performance for the bonds in our portfolios of generally anywhere from +9-16% (net of fees), depending on your investment time period calculus.  Our equity performance in most cases was north of +11% (also net of fees).  While that is exciting, I must urge caution with regards to this year’s and next year’s expected rates of return as I did in January due to fairly extreme valuation levels in many asset classes.  WARNING:  I will be very surprised if we’re not in a recession by this time next year.  I’ve been saying that for 2018-19 a recession would be tough to avoid based on where we are in the business cycle and how the Fed seems determined to tighten monetary policy in the face of slowing economic traction – irrespective of politics and promises of growth policies.

The RIGHT time to be a client

I can't imagine a better time to be a client than 2017-2019.  It's not going to pay to have a cookie cutter approach to investing very soon.  You will most likely make more consistent returns thru our conservative, active approach to investing and you should lose less money during volatile periods than just about anywhere else due to our expertise in bonds and attention to detail in valuation work within equities (trying to make sure you don't pay too much for stocks).

Recession?  What?  Why on earth would you say that when at the rate it SEEMS people are buying new cars, homes sales are where they are, people are eating out all the time, and commercial real estate is as hot as it is?

Each of the aforementioned indicators is ACTUALLY rolling over and that is what happens late-cycle.  Importantly, also, in the U.S., domestic-based profits are peaking and generally rolling over and the increase in corporate profits that is showing up within the S&P 500 is almost entirely an international and also energy sector stories.

Yeah, but what about tax reform and less regulation to help grow the economy?

“People forget that even with a President who knew how to compromise, it took Ronald Reagan five years to get tax reform thru Congress, and along the way, specifically from July 1981 to November 1982, he oversaw a six-quarter recession, as all GOP leaders faced in the first half of their first term all the way back to Teddy Roosevelt (And typically caused more by tighter liquidity conditions than anything they did!).  Who knows, folks – either we relive history or Donald Trump will be able to put an end to this streak…though the palty 0.6% starting point here on growth doesn’t leave much room for error.”  David Rosenberg – Chief Economist – Gluskin Sheff – April 12, 2017

Happy Birthday to one of my absolutely favorite Founding Fathers and Presidents, Thomas Jefferson (April 13th)!!!

I LOVE that quote, don’t you?

What’s the Fed gonna do?

IF the Fed moves the needle that far by then, the yield curve will most likely invert and we’ll have already been in recession.  The Treasury markets can’t even manage to stay above 3% on the 30 year much less reach that range on the 10 year.  This is not me being pessimistic despite the flack I’m presently taking from other market thinkers– it’s clinical.

So what’s all that noise about higher rates?  I’m not trying to be a smart alec here, it’s just that financial commentators are getting it WRONG all over again. 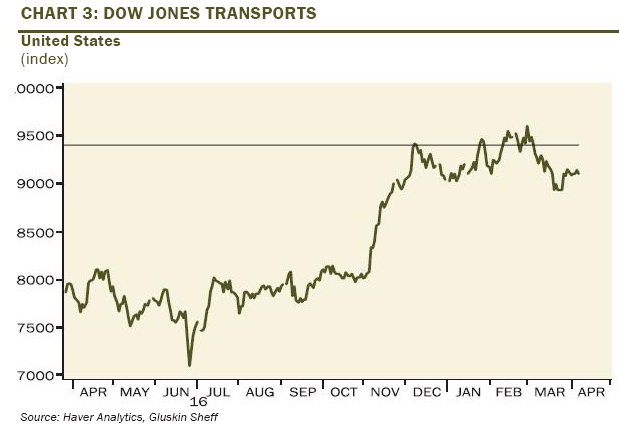 Rates on the short end have come up as the Fed has raised the Fed Funds rate a total of three times inclusive of the first time in December 2015, but longer rates…?...Are they? (Chart below is of the ten year UST over the last five year time period) 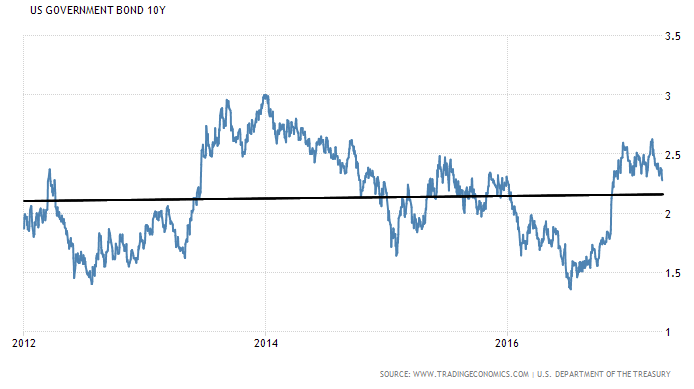 In Germany, where their economy is actually firing on a lot of cylinders, rate are indeed trending somewhat higher… (chart is of one year time period) 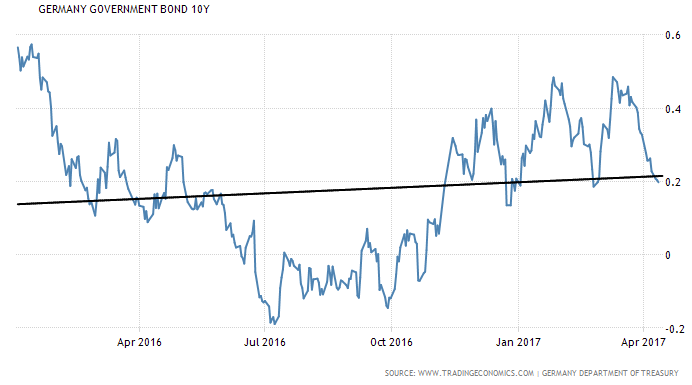 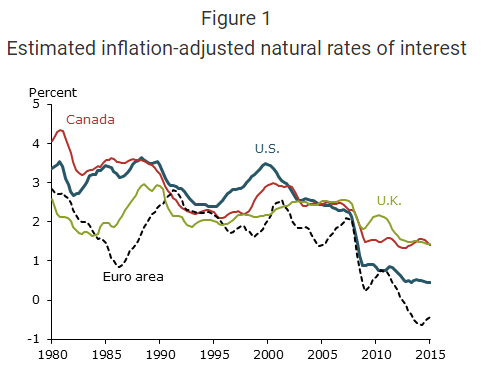 “The key takeaway from these global trends is that interest rates are going to stay lower than we’ve come to expect in the past.  This does not mean they will be zero, but when juxtaposed with pre-recession normal short-term interest rates of, say, 4-4.5%, it may be jarring to see the underlying natural rate of interest guiding us towards a new normal of 3-3.5%-or even lower.  Importantly, this future low level of interest rates is not due to easy, monetary policy; instead, it is the rate expected to prevail when the economy is at full strength and the stance of monetary policy is neutral.  Low inflation and growth is likely the future.”  John Williams - President and CEO of the Federal Reserve Bank of San Francisco

“We must not let our rulers load us with perpetual debt.”  Thomas Jefferson 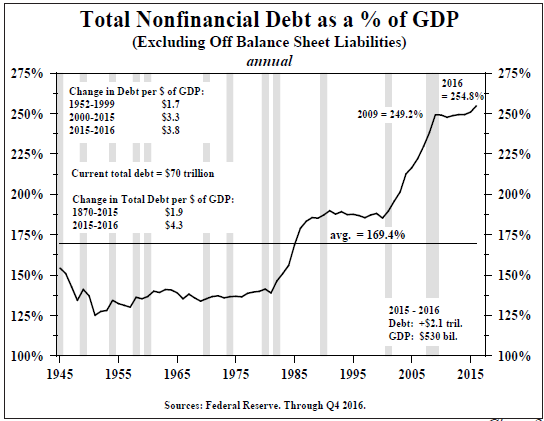 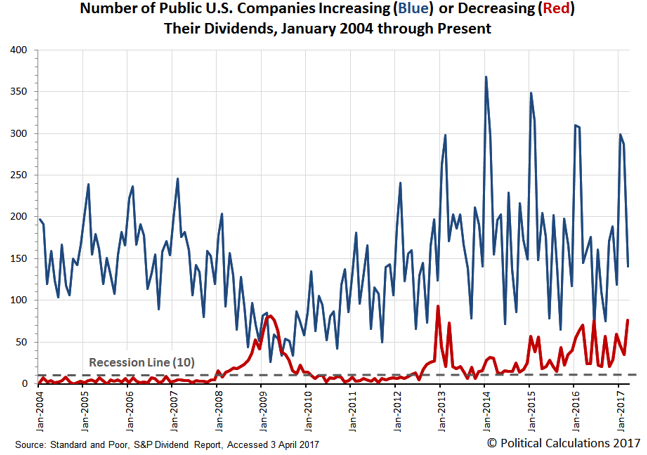 The U.S. stock markets are priced for perfection.  As you know, there is no such thing.  We’ve been trimming some of our gains in select U.S. stocks and repositioning some of those dollars into low cost, private-pension-like fixed annuities, Select Asian Emerging Markets, German Small Caps (based on lower valuations and better earnings revisions), and select corporate and municipal bonds.

I’m reading 1776, by David McCullough, author of John Adams and Truman, and to no surprise, it’s fantastic.  McCullough is an excellent author (duh!  He’s received the Pulitzer twice, that’s some indication, right?)

“My countrymen, I know from their form of government and steady attachment heretofore to royalty, will come reluctantly into the idea of independency [George Washington wrote], but time and persecution brings many wonderful things to pass, and by private letters which I have lately received from Virginia, I find Common Sense is working a powerful change there in the minds of many men.”  Thomas Paine – page 112 – 1776 (Book) – David McCullough (author)

What does common sense tell you about the amount of debt we currently have on the balance sheets of the main users of debt (considered to be):  1) The Government; 2) Corporations; 3) Individuals)???

Does common sense tell you that IF interest rates were to skyrocket that there might be a problem?

1)  Do you think that it is possible that the traditional financial/economics community is misunderstanding the constraints to potential growth due to not understanding the lingering effects of balance sheet recessions and the process of deleveraging?  Why does that matter?

2)  Do you think that debt-induced asset bubbles are good or bad for the futures of unborn millions of people?

3)  Are you aware that the Fed should have started to raise the Fed Funds rate around July 2012? What have the implications been to asset price values from that time forward to present?

4)  Have you ever constructed stock and bond portfolios for your clients who have their large earnings years behind them and then managed those portfolios thru an interest rate cycle?

5)  Why specifically do you think that the Fed will raise the funds rate to anywhere above 3% as a terminus for this current cycle?

6)  How would you lead investors as an advisor/economist to prepare them for a variety of potential interest rate scenario outcomes?

The best leading indicator for retail sales is the restaurant sector – we sold our shares of Cracker Barrel because we had roughly a double in most accounts, they're too expensive, and their same store sales look wobbly and their earnings may also be rolling over.  I can’t wait to buy it back.  Like my wife says, “You only want me to buy your Old Navy jeans once a year when they’re $10 instead of when they’re $30.”  That’s correct.  (Maybe I shouldn’t admit just how frugal I am!)

The recent sharp increases in some inflation measures we saw in 2016 won’t likely be sustainable.  Nearly all of the data I’ve been sifting through of late seems very late cycle to me (and not just me but many other experts who are much smarter than I am).

“The fact that the Fed is tightening in this environment (and that real GDP growth is around 1.2% in Q1), is going to end up flattening the yield curve rather dramatically.”  David Rosenberg – March 15, 2017

St. Louis Fed President James Bullard (he is not a voter until 2019), said on Feb 9, 2017: “The low real interest rate regime is a global phenomenon, and it has been many years in the making, and is unlikely to turn around quickly.  It does not appear that undue inflationary pressure is building so far.”

Are we witnessing the pre-recession time period or the likelihood that the Fed and Treasury manipulate the yield curve like the Japanese are presently doing?

We don’t know yet.

OK. OK.  I get it – you’re pretty nerdy about the bond market, but what stocks should I be buying?

Why TEVA now?  Price and earnings appear to have troughed and I think the value is there - it's just a matter of leadership and then hopefully seeing the price trade back up to its earnings line; implying a movement to $70 a share from $32 today (4/13/17) 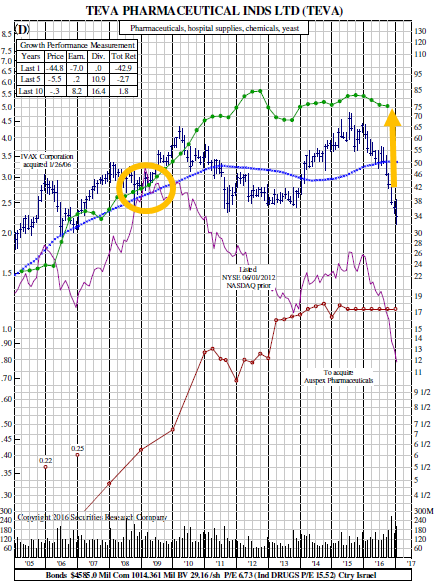 Other notable, recent buys and sells

Thank you so very much for your trust and your business and/or your interest in learning how our team can help you.  I have a great job and people like you make it possible.

Have a wonderful Easter Holiday!  And Happy Spring!