I sure hope that your Holidays went splendidly well and that your winter 2019 is going great.

"My doctor told me that jogging could add years to my life.  I think he was right.  I feel ten years older already."  Milton Berle

You know, with the colder temperatures, bluer skies and leaves down off of the trees:  being outside working and/or exercising sure is nice!  (Unless of course, you're in the polar vortex - yikes, that's COLD!)...

By way of review from last time, I said that the nine Fed hikes since December 2015 have exposed bubbles and some of those bubbles deflated a bit in Q4 2018.  I also noted that any time you have the 2 year US Treasury increase in yield by approximately 300 bps (or 3%), credit markets get damaged and you've got a recession shortly there after.  2018 marked the worst bond market performance (overall), since 2008.  We held up very, very well on a comparative basis, and we actually added some to select bond positions (where we only had 50% our intended weighting), with the volatility and drop in prices late 2018.

So I didn't know all of that spread widening and stock selloff would happen right away last November, and with such gusto, I figured we'd see it in full earnest in 2019, but it did and we've seen a reflexive rebound in both credit markets (bonds) and equity markets (stocks).

Make no mistake about it - a PAUSE by the Fed (last week's messaging was a COMPLETE 180 turn for Powell).  And it's NOT a good signal, BTW.

"A troubling history lesson from early 2001 and late 2007 is that even when central banks start easing policy, it does not stem savage bear markets."  Financial Times - January 7, 2019

"The Fed will not be able to deliver the same rate cut as has historically been the case since the Funds rate would be truncated by the zero bound.  Even a quasi-recession would lead to such a diminished inflation that the U.S. economy could face zero inflation or outright deflation." - Dr. Lacy Hunt - Hoisington Investment Management - November 2018

Why did we trim our pricey stock holdings a year ago, in January 2018?

Because on a price to sales basis (and PE ratio), some stocks were (are still), very expensive...

"Current valuation ratios for households and businesses are high relative to historical benchmarks...we find that the current price-to-earnings ratio predicts approximately zero growth in real equity prices over the next ten years."

(Gee; that's negative sounding.  Wait - is it negative, or clinical?  There's a difference...)

January 2018 Price to Sales Ratio took out the Dotcom Peak

(This is a chart that serves as a reminder as to why we trimmed our performing, expensive stocks a year ago).  This just provides us some historical context in terms of Price to Sales valuation (you may hear me reference Price to Sales often)). 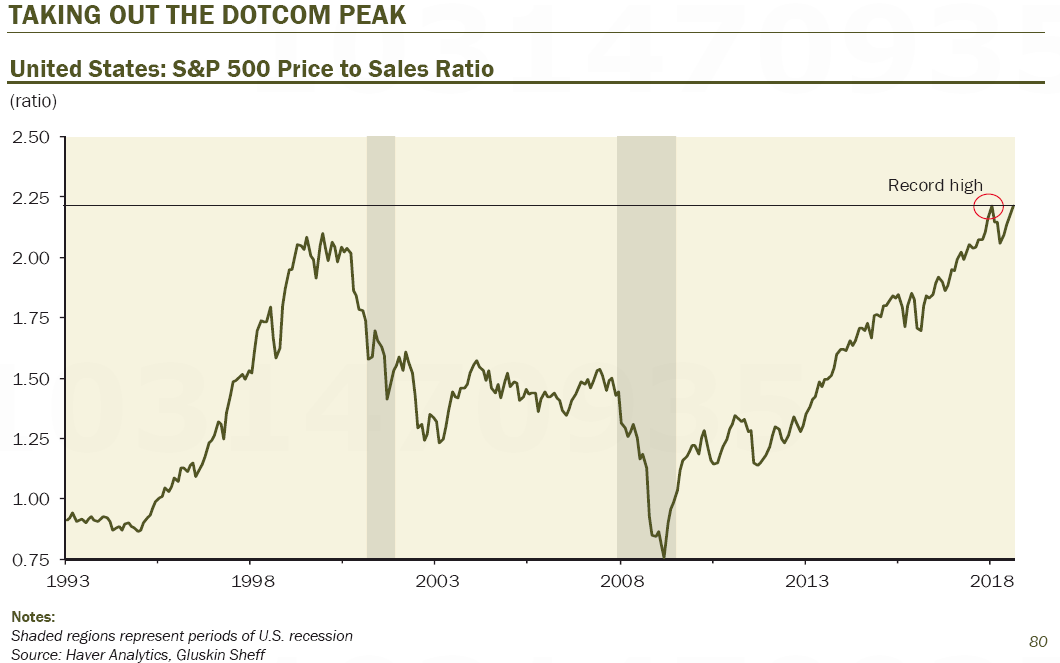 Ok, but what's NEXT for the stock market?

Now I am not saying that the S&P 500 is gonna drop 29%.  Many stocks in Q4 18 DID that already.  But as you can see, from our handy chart above, after first summitting Exhaustion Peak, and then Mt. Double Top, the S&P 500 has only regained some of that value.  Plus we don't own the S&P 500 (we'll let the herd do that), we generally own taxable investments that yield 4% plus and tax-free investments that yield 2% plus and we're not likely to see large dividend cuts and we're not paying too much on a price to sales basis for the equities (and hopefully not too high of a PEG ratio for said equities, also).

As one of my dear mentors always says, "Forewarned is forearmed."

Let's move on and look thru the windshield and look ahead versus just looking in the rear-view mirror...

So...it's almost Valentine's Day, so I thought I'd utilize a blast from the past (the TV show), "Love, American style".

I put a slight twist on it; a major theme for 2019 will be:  Corporate Deleveraging 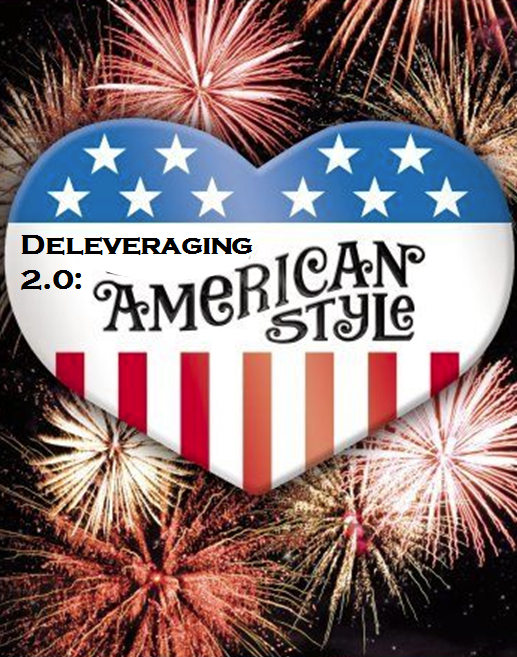 Why would I say that there will be corporate deleveraging in 2019 when Apple has something like $245 Billion in cash?

Well, the few that have buckets of cash with little debt skew the overall numbers...take a look at the USA Corp Debt-to-GDP ratio depicting last year's approximate credit cycle peak...

"Debt-laden businesses will move to shore up their stretched balance sheets [Jack's emphasis "2.0"] in the face of an onerous refinancing calendar, just as households were compelled to do in the aftermath of the prior credit bubble [Jack's emphasis "1.0"] over a decade ago."  David Rosenberg - Chief Economist - Gluskin Sheff - January 31, 2019 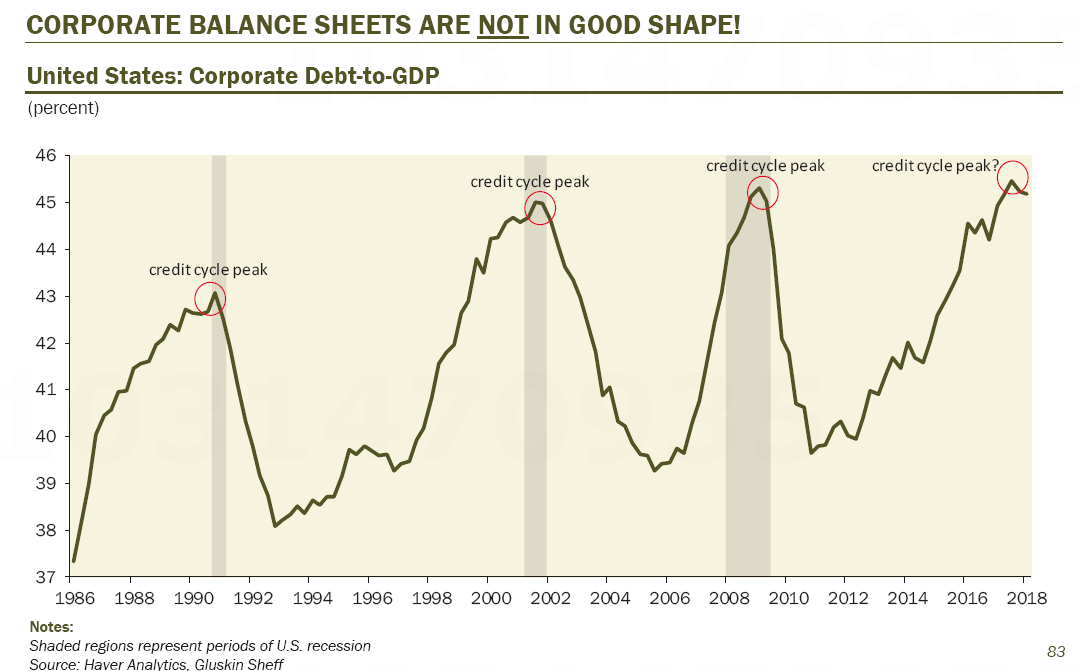 Show us the way forward, Scooter!  "Lead on!"

Our old dog, Scooter, is gonna show us the way to get across to the other side... 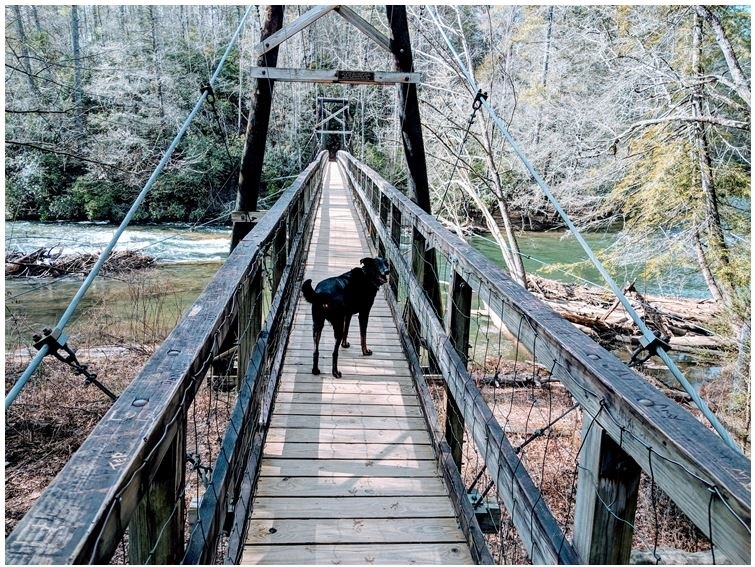 Are we in recession / headed towards recession?

A lot of analysts look at the 10 year UST minus the 2 year UST as a way to better understand inverted yield curves and that's very useful.  However, with both QE and QT (the Fed's bond buying program), the Fed has distorted the credit markets so much, that I've lately been analyzing the 5 year UST minus the FF rate (see chart below)

As you can see (in the chart above), the relationship between the two (the 5 year UST minus the FF rate), typically only behaves this way months before a recession.  It's important to be aware of this, that's for sure, and not just do like the financial pundits on TV and think that the Fed is gonna save us from a recession.

I am placing this quote twice in this edition of Insights as a reminder:

"A troubling history lesson from early 2001 and late 2007 is that even when central banks start easing policy, it does not stem savage bear markets."  Financial Times - January 7, 2019

What's next for the stock market?

For the next few months, it's a coin toss.  Seriously. 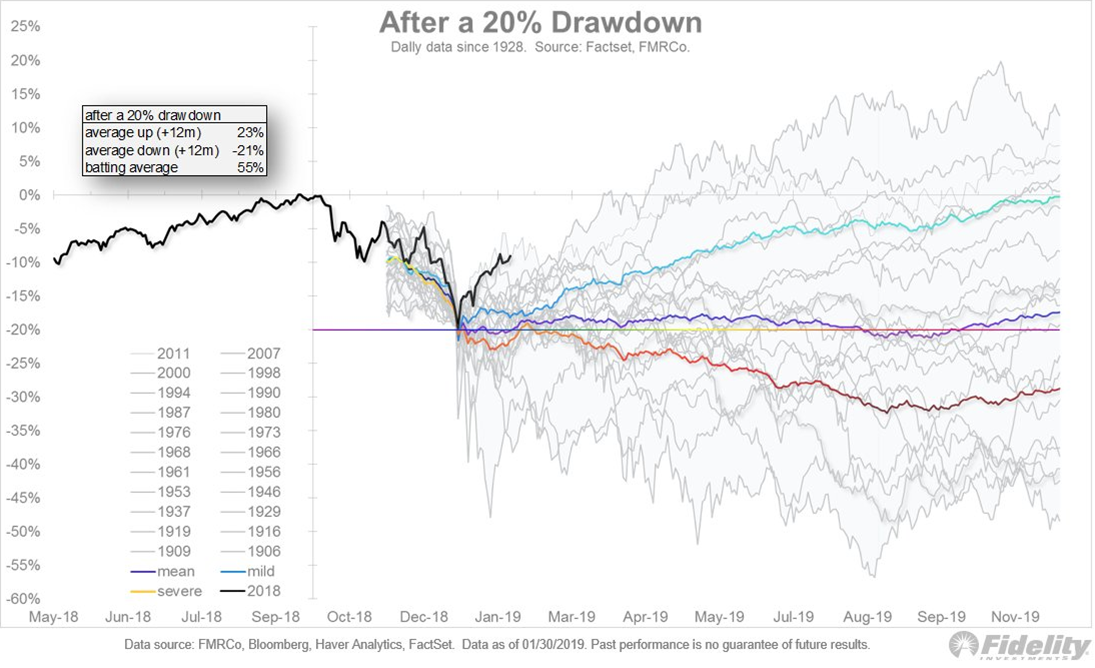 Some of the corporations that serve as real bellwethers for the economy ALL guided 2019 EPS LOWER:

At this point in the cycle, investors HAVE to remember to have discipline and look thru the windshield to what's ahead (leading indicators), and not just the rear-view mirror and things that are lagging indicators.

The credit markets told us loud and clear in December 2018 that the Fed has tightened too much.  The Fed's talk about the "neutral rate", appears to be around 2.0-2.5%.  Unfortunately, with the gargantuan amount of debt outstanding and with a culture and an economy so addicted to LOW interest rates, the Fed will most likely be lowering rates before the end of 2020 (maybe before the end of 2019).

The Consumer - 'more at stake than their profits or their jobs'

"Today, a large amount of our people have more at stake than their profits or their jobs.  They owe money on their homes, their radios, their automobiles, their electric washing machines and many other luxuries.  They have laid wagers on continuing prosperity.  Let there be a break in the endless chain of prosperity and this whole structure of personal credit will collapse and bury millions beneath it with hardship unprecedented in any former period of depression."  Hubert Work, M.D., 1930

"The history of social benefits in the United States has exposed a deep-seated inability to square benefits with their funding.  Eventually the system will hit the wall.  In 1991, Sweden was plunged into what was known locally as the "black-of-night-crisis":  the Swedish banking system seized up, foreign investors lost confidence in the government.  Sweden reduced public spending as a proportion of GDP from 67 percent in 1993 to 49 percent today.  There is even a circuit breaker that kicks in when the economy is in recession:  pensions go down if the economy can't afford them.

...Sweden has about the same population as New York City...but Sweden nonetheless holds important lessons for America.  Sweden's example shows that even the most government-addicted country can change course.  Government can shrink as well as expand."  - from "Capitalism in America:  A History", by Alan Greenspan - 2018

"High yield bonds are gonna give you stock-like returns, and maybe if stocks run, they'll do 1% per year less than stocks, but with 50% of the drawdown and 2/3 less volatility".  Gershon Distenfeld - Bloomberg "Real Yield" (show) - November 16, 2018

Below is a chart of the price of the 8.25% Liberty Media Corp Senior Corp bonds that mature in 2030.  The company owns the Atlanta Braves, Sirius XM radio and other media companies.  So we invested in them under par with a yield per year for 11 years of 8.6% per year.  I'll take that.  Those bonds are non-callable, too, by the way; even when rates come back down, the bond holder is in the driver's seat with these. 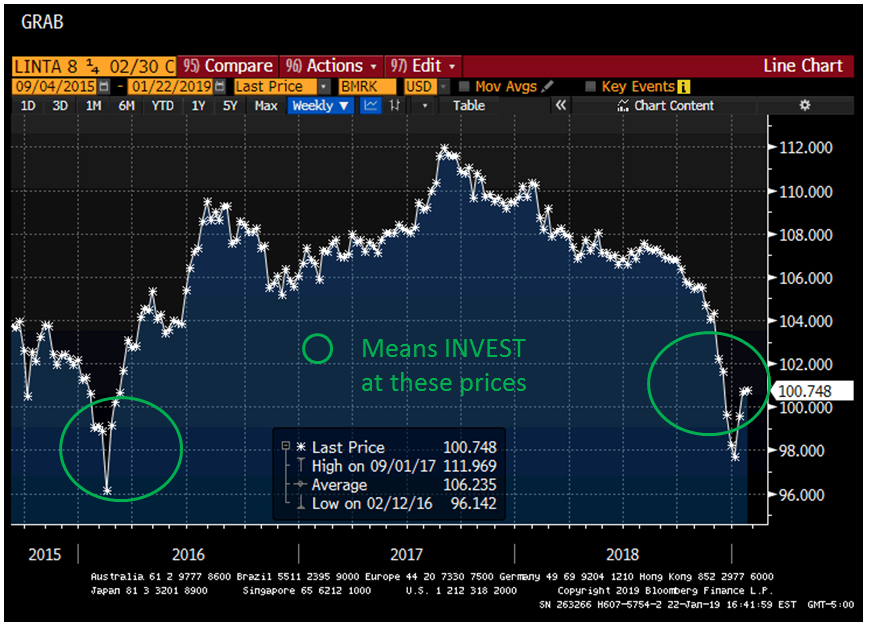 See the red double ended arrow?  That's the spread between the UST 10 year and the 10 year German bund.  That's gonna narrow (yields in the U.S. headed lower, German yields aren't going significantly higher at this stage in the cycle). 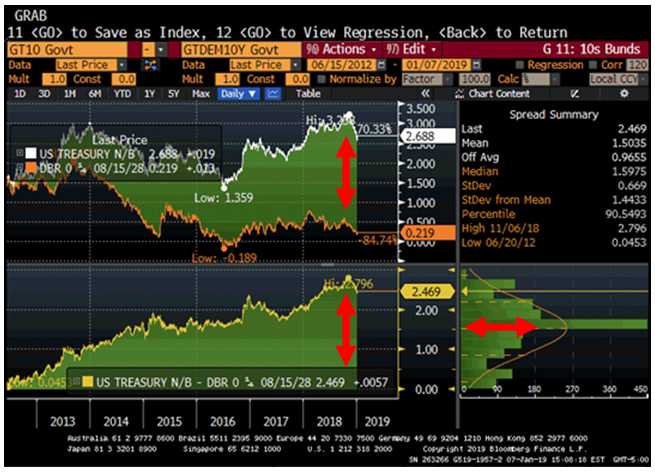 How about some good news, already?  Hey?

Some good news is that some companies have taken debt worries to heart.  A Moody's report published last month found a "drastic change" in behavior among 100 cash-rich companies following the corporate tax cut.  These companies devoted 37% of their cash flow to debt repayment, compared with just 5% before the tax cuts went into effect.  (Source:  Moody's)

Gap is closing a bunch of stores "Aggressively"; that's a bond-holder friendly move for us.  We own the 2021 bonds (BB+ rated)

Select cyclical company bonds whose stocks are priced for recession but bonds are very attractive:

Low price to sales stocks with manageable dividend payout ratios and sectors include:

Small bit of volatility as an asset class

Thank you so much for your business / interest in our company and how we can serve you and your family.  I have a great job and people like you make it possible.

Have a wonderful day! 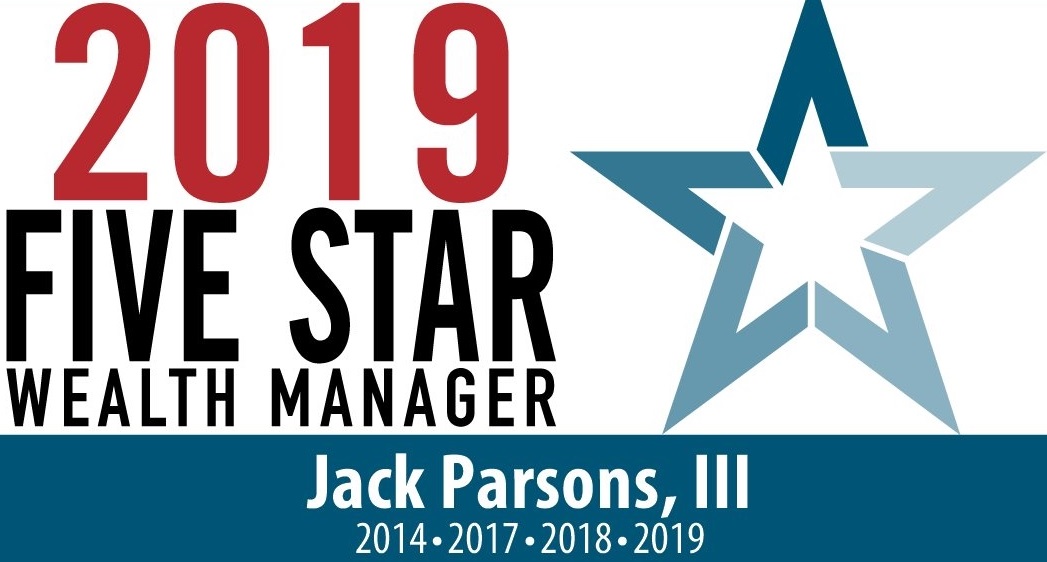