“History doesn’t repeat itself, but it does rhyme.”  Mark Twain

Since around August 2012, I’ve seen low quality bond prices continue to accelerate (and thus yields decline), in a fashion that I’ve never seen before.  Managing credit market investments through that has required immense patience and care.  The credit markets are overheating (big time).  The investor thirst for yield, (because we are in such a low-yield environment), can no longer be considered “thirst”.  “It has turned into desperation for yield”.  Economist David Rosenberg – April 11, 2014  One has to look no further than the Greek long bond auction of April 10’th.  Just a few years ago, nobody wanted their bonds (and for good reason).  The bonds were then yielding 30%, at the height of the crisis, and now, at only 5%, the auction was 5 times oversubscribed!  Respectfully, Dr. Janet Yellen, and other academics at the Fed don’t consider this present level of overheating as detrimental yet.  They don’t see it as clearly as those of us who manage credit market investments in addition to stocks do.

The most vocal member of the Federal Reserve Board sounding the alarm on this topic, Dr. Jeremy Stein, sees it this way for sure.  Since February 2013, Dr. Stein has been cautioning members of the Fed and frankly anyone who would listen, that the risk taking that is going on in credit markets is getting out of hand and that it will ultimately threaten financial stability.  These low rates are encouraging levels of indebtedness and investment activity that are unsustainable as we enter a normalized interest rate environment in the years ahead.

This chart represents some of the riskiest types of bond issuance and illustrates the volume in billions of dollars.  The numbers are staggering.  "Global covenant-lite" loan issuance in 2014 to date has topped $130 billion, exceeding the pace seen in 2013 ($400 billion for the full year), which in turn was almost triple the pace of 2012". page 3 - Institute of International Finance March 27, 2014 (full report has a link down this page). 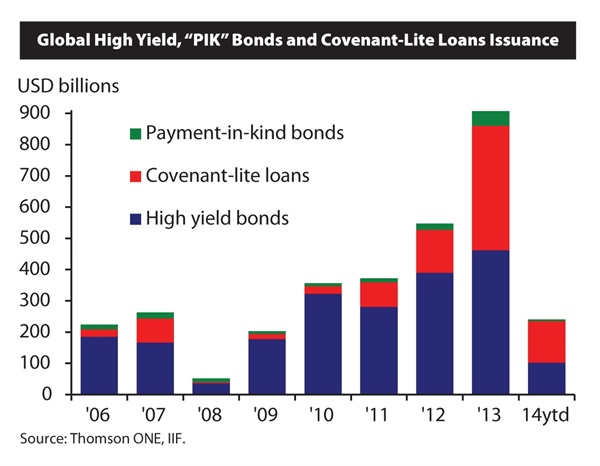 In October 2013, Robert Shiller won the Nobel Prize in economics for his research on spotting market bubbles.  From 1990-2004, Shiller was on the economic advisory panel of the Federal Reserve Bank of New York.  Shiller, later, after he left the Fed and was at Yale, said, “I felt [while at the Fed] the need to use restraint.  The consensus in the group was that there was no bubble and no need to raise interest rates.  To suggest otherwise was distinctly uncomfortable.  I made my point very gently, and felt vulnerable expressing such quirky views.”  He went on to say, “Deviating too far from consensus leaves one feeling potentially ostracized from the group, with the risk that one may be terminated.”

Thursday, April 3’rd, 2014, Dr. Stein announced his resignation for May 28, 2014, to return to Harvard.  On February 7, 2013, in a presentation titled, “Restoring Household Financial Stability after the Great Recession:  Why Household Balance Sheets Matter”, he said, “A badly underwritten subprime loan is one thing, and a badly underwritten subprime loan that serves as the collateral for asset-backed commercial paper (ABCP), held by a money market fund is something else—and more dangerous.”  He went on to say, “One of the most difficult jobs that central banks face is in dealing with episodes of credit market overheating that pose a potential threat to financial stability.  As compared with inflation or unemployment, measurement is much harder, so even recognizing the extent of the problem in real time is a major challenge.  Waiting for decisive proof of market overheating may amount to an implicit policy of inaction on this dimension.”

I believe that all Dr. Stein has to do is keep teaching at Harvard, and eventually, he’ll be eligible for the Nobel Prize in economics just like his counterpart from Yale – because history may not “repeat itself, but it does rhyme.”

Thank you for your business / your interest in how this company can help you and your family.  I have a great job and people like you make it possible.  Have a great day.

PS - Enjoy this KAL (from The Economist), cartoon of Russian President Vladimir Putin