Pick something & Sell it

Last quarter, in my Insights piece, I wrote that Yellen and the Fed were fighting asset bubbles.  I also said that I don't think the Fed will make it to 3% as a terminus on the Fed Funds rate by 2019, because we're towards the end of both the business cycle and the credit cycle, and that they'll be back in Q.E., (or some other form of yield curve manipulation), by 2020.  I still believe that.  And for what it's worth, I don't believe that the Fed will be able to reduce the size of its balance sheet by $50B a month.  October's proposed $10B a month, sure.  And even $20B a month, sure; the markets can absorb that supply no problem.  But $50B a month is another story all together.

"The key to successful, long-term investing is not just riding bull markets but doing your utmost to avoid the severe capital impairment and years of digging out of the holes that bear markets bring."  David Rosenberg - Chief Economist, Gluskin Sheff - October 13, 2017 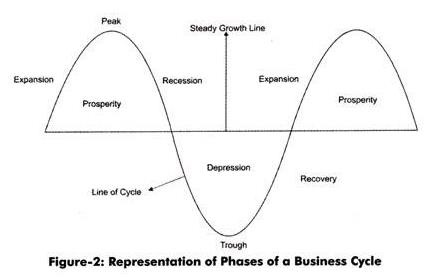 (Forgive the run-on sentence here)>  Based on my experience, and importantly my synthesis of the research of those much smarter than me and with more experience, based on where we are in the business cycle, asset valuations and investor sentiment, I have several suspicions, but few conclusions.

Another way to say this is to pass along the lyrics of one of my musical heroes who recently passed away - The Gentle Giant, Mr. Don Williams.

From his song, "The Answer"

But I'm close to understanding just how far I have to go,

We give our hearts, we take our chances,

And know the fool ain't the one with all the questions,

To tell the truth, it's someone who believes they have the answer."

So here are some suspicions...

What I suspect might happen to the yield curve

What I suspect may happen to 2018 Fed "Dot Plot" projections

The Fed's "Dot Plot" will be revised lower; just a matter of time (my rough estimate below). 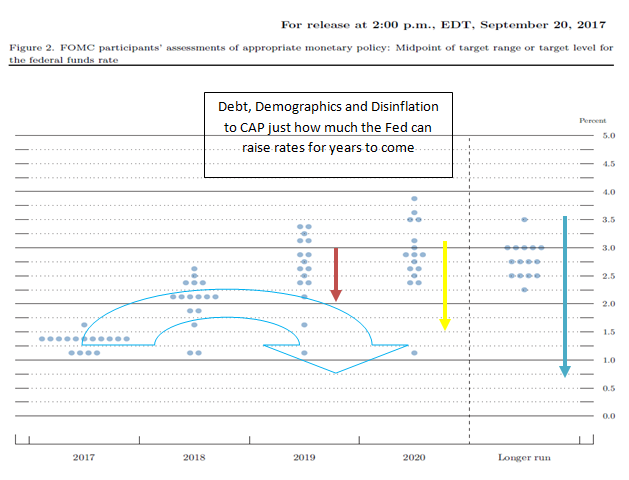 I suspect that consumer spending may taper off a bit and saving rate will increase.

"An increase in borrowing was the major factor behind the recent slide in the saving rate.  Consumer credit over the past year has risen by $208 billion, or 5.9%.  Interestingly, without the drawdown in the saving rate, real consumer spending over the past two years would have been reduced by more than half."  [Suspicion:  the current spending level cannot be sustained.]    Van Hoisington & Lacy Hunt, Ph.D. - Hoisington Investment Mgmt. - Q3 2017 Quarterly Review 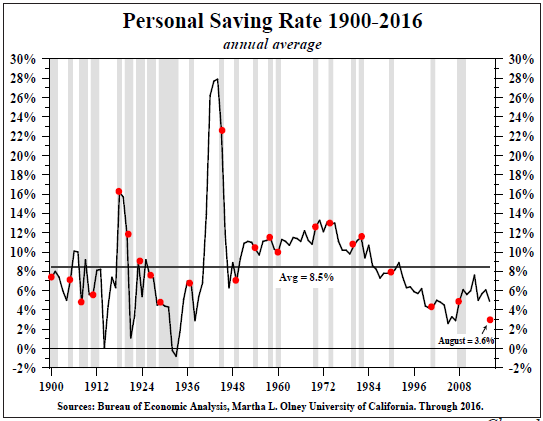 I suspect that outstanding commercial and industrial loans against commercial real estate could become an issue.  There are way too many covenant-lite debt deals that are way over-subscribed for my liking.

So...there's $2.1 Trillion in outstanding commercial and industrial loans at banks.  Hmm.  Okay.  That's 31% higher than in 2007.  This should be an area of concern.  When I go around the country and I see the bull market in commercial real estate that is inextricably tied to the consumer, and I know about where we are in the business cycle and also the credit cycle, I think..."yikes"...(this is not going to end well...(in other words, I wouldn't want to be the bank on this loan))...

I suspect that the long bond (30 year U.S. Treasury), will drift lower if the Fed increases Fed Funds rate in December and/or at least once in 2018 instead of how the market pundits are thinking they will 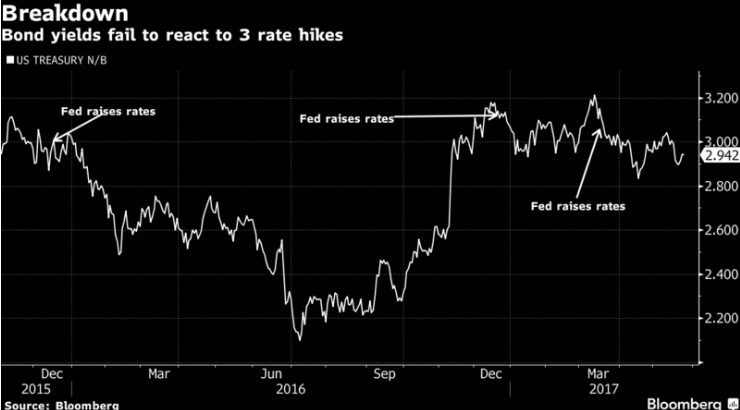 I fear and respect this chart, I don't suspect it.  We don't have enough acuity into the next credit cycle yet.  This is a chart (below), of the Japanese 10 year JGB and our 10 year U.S. Treasury and it shows (time-adjusted), that we're about where they were 15 years ago. 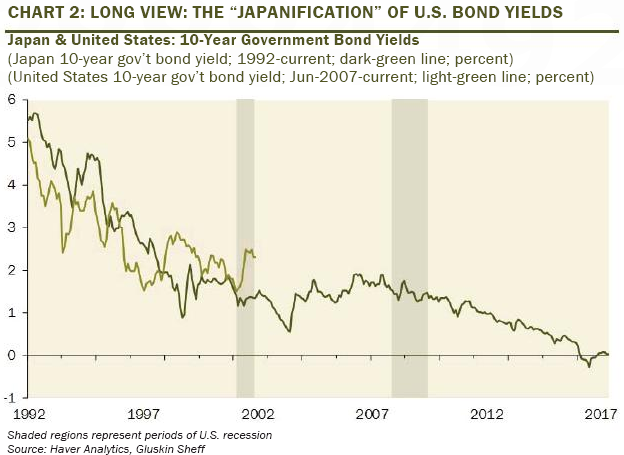 Some investments that were sold in Q3

British Tobacco (when we purchased, was Reynolds American and stock was up 300+%), BTI not the same as RAI

We trimmed some of our shares in Baron Focus Growth Institutional Mutual Fund (BFGIX), based on the rise in value and how expensive some of the top holdings in the fund have become. 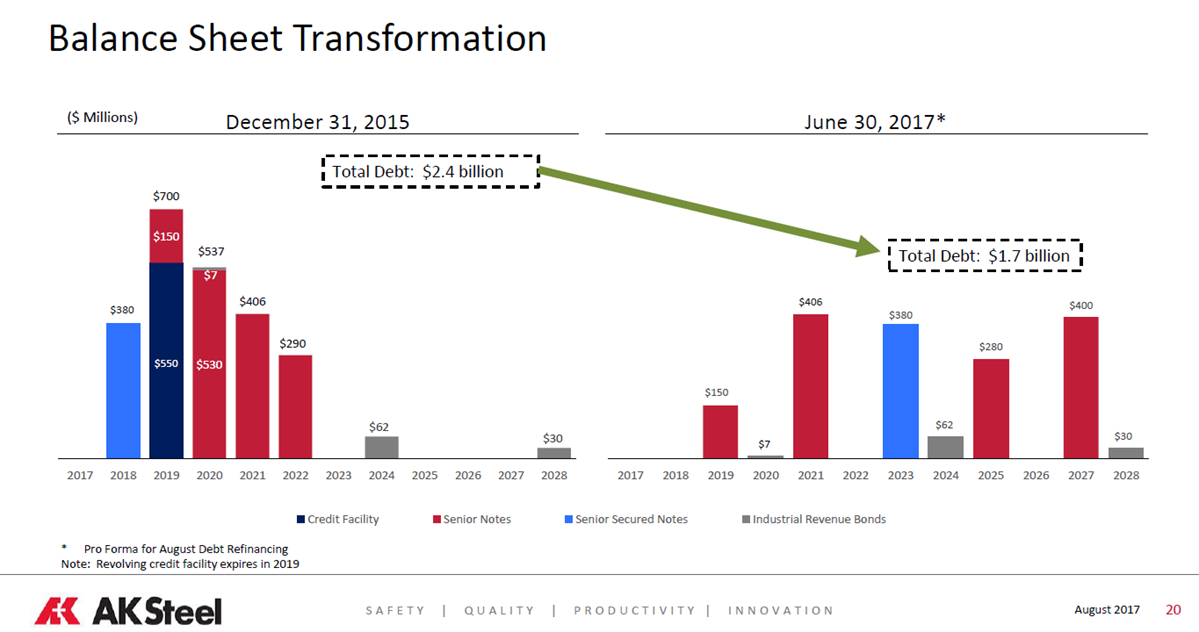 Everything's expensive and we're late in the business cycle and don't believe the hype about political programs gonna extend the cycle<Nope.

A day after Michael Bloomberg said to attendees of the Global Business Forum in NYC, "I can't for the life of me figure out why the markets are going higher and higher with what we have going on", Bloomberg produced an article touting the latest "Wealth Effect" Peak that's recently been achieved.  See "U.S. Household Wealth rises to $1.7T to another record" (this is late cycle stuff)  Let's talk when they run an article that says something like, "Entire country shuns equities", and I'll be very, very interested in getting aggressive with equities.

The BEST value around the December 2019 timeframe IF the equity bulls get their wish which is for the party to last just a little bit longer, COULD BE money market rates as high as 2%.  Wouldn't that be cool?  Seriously.  On a risk-reward basis that's good in this environment.  Remember when they were 6% in 2004...boy those were the days, eh?

Bonds are due a near-term risk spread shock

So I'm being as surgical as I've been in years in buying bonds (with new money), presently (they're uber-expensive), because they're vulnerable to a near-term shock on a spread basis (Source:  Guggenheim Partners). 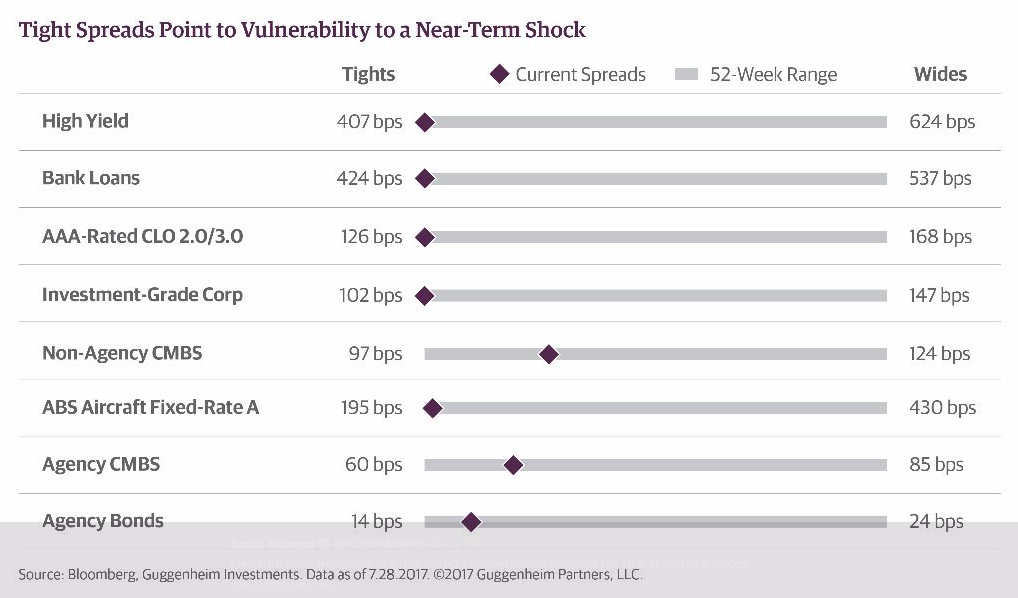 What a fascinating time to be an investor and to focus on important things and not all the noise.  I hope that you and your's are able to carve out some time to be active as well as reflective and most importantly: spiritually, emotionally, financially, and physically healthy.

I have a great job and people like you make it possible.  Thank you so much for your business.  I sincerely hope that you and your family have a wonderful Fall and Holiday!  Happy Thanksgiving, Merry Christmas and Happy New Year!

"Talk is cheap and times are wasting,

Wine is for tasting, roads for taking,

Talk is cheap and time's a wastin'!" 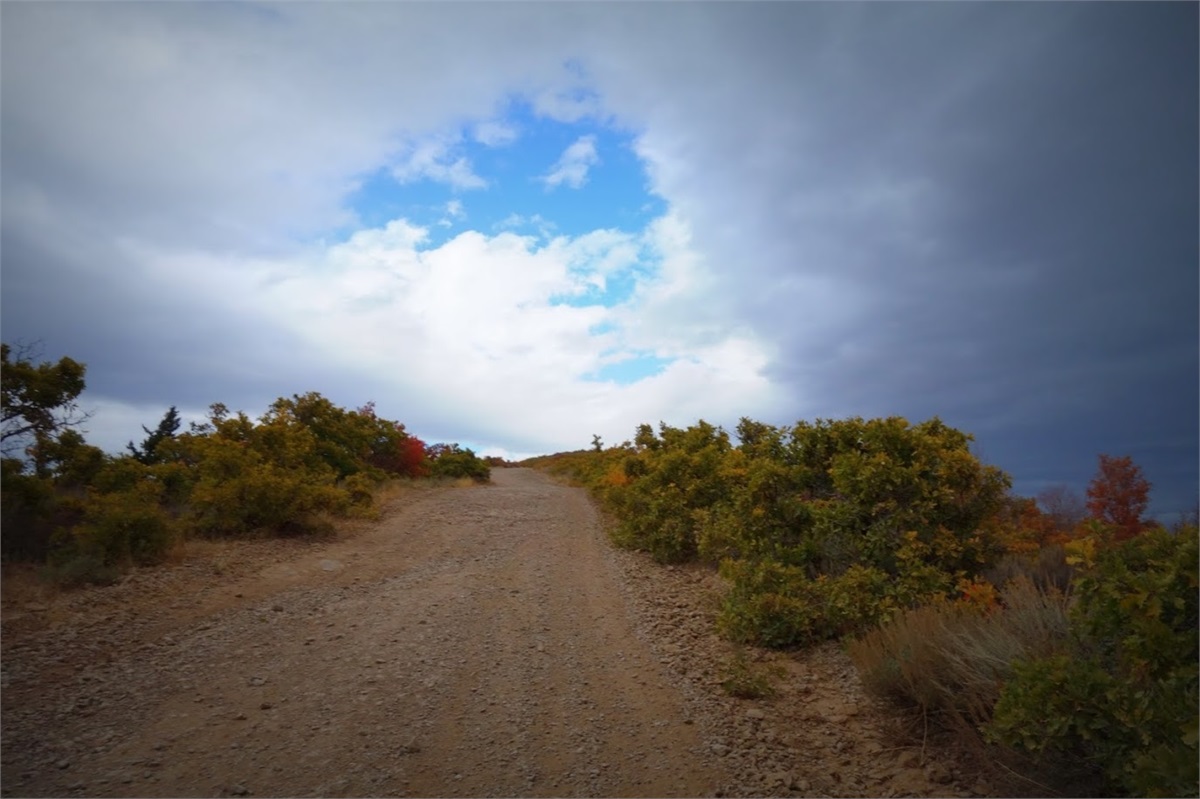 Image (above):  Dirt road at around 9500 ft elevation in the Wasatch Mountains, in Utah riding side by side ATV with my son.

This edition of Insights publication is produced In Honor of our dear friends and long time clients, Mr. John & Mrs. Judy Stoddard (both deceased), of Destin, Florida 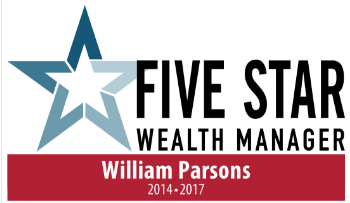