"Prices of risky assets have increased in most major asset markets in recent months even as risk-free rates also rose.  In equity markets, price-to-earnings ratios now stand in the top quintiles of their historical distributions, while corporate bond spreads are near their post-crisis lows.  Prices of commercial real estate (CRE) have grown faster than rents for some time, and measures of the amount of operating income relative to the sale price of commercial properties--the capitalization rate--have reached historical lows, suggesting continued pressures in the CRE market despite some tightening in credit conditions."  Federal Reserve Vice Chairman Stan Fischer - June 27, 2017

"The equity market seems to be running very much on fumes.  I am somewhat concerned about the complacency in the market."  San Francisco Federal Reserve President John Willilams - June 27, 2017

"The message should be clear.  We are in a topping process and risks are building."  Chief Economist, Gluskin Sheff - David Rosenberg - June 28, 2017 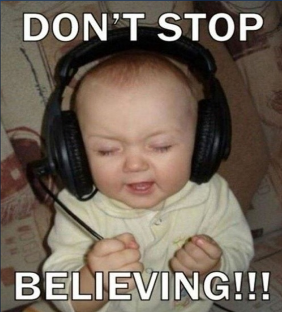 I am not going to sit here and say “I told you so”. But if you remember, for YEARS I’ve been saying that the approximate terminus point for this interest rate cycle was going to be MUCH lower than the Fed was predicting.

"Until the structural issues around growth and inflation are addressed, the markets are likely to be stuck in a low-rate environment perhaps longer than anticipated.  This prolonged period of low rates is leading to distortions in asset prices, which will become more pronounced in time and inevitably lead to destabilizing bubbles that will threaten the economic expansion, ultimately bringing down prices on all risk assets....The market is discounting the fact that the Fed will have to stop they hiking cycle sooner in order to avoid further downward price pressure."  Chief Economist, Guggenheim Partners - Scott Minerd - June 28, 2017

So now what? Here’s the common mantra at present (and the financial media doesn’t help one iota): “Stocks are up and there’s momentum there, I don’t want to miss out, and I don’t want bonds because everyone says you shouldn’t own bonds right now, right, with interest rates going higher and all…”
Where to begin…WOW…(dramatic pause)…

So, in the U.S., bonds comprise a whopping 4% of all investment asset allocation. That's scary to me.

You could say that one of the ways I’ve protected clients is by being up the capital structure with solid, dependable income streams from non-callable bonds (and some callable), with very high coupon rates and real yields is because I FOUGHT THE FED. The mantra used to be DON’T FIGHT THE FED. How about BELIEVE SOME OF WHAT THE FED SAYS, BUT DON’T BELIEVE EVERYTHING THE FED SAYS. We’ve participated in the upswing in stocks; like many, off of the 09 lows we’ve got some stocks that are up 300%+, but we weren’t planning on that. We WERE planning on the supply of highly yielding, dependable bonds running low. That theory against UBER-HIGH demand means, grab all you can and lock them away. So in many ways, I contend, our clients are MORE SET than just about any other advisors' clients. But I am a little partial.  Wanna know why? It’s because no matter who’s President, there IS such a thing as the economic cycle. There’s the expansion and there’s the contraction. I earn my money when I get that call mainly right. Not with surgical precision, but mainly right. So where we are in the economic cycle MATTERS. One example: Because but we’ve got bonds that pay 3X+ in many cases what other investors’ bonds pay them twice a year. Seriously.

Another thing that frightens me
This is the degree to which investors are depending at this stage of the economic cycle TOO MUCH on income from their investments. Folks ought to be ratcheting their spending downward rather than upward at this point in the cycle. Why? Because the next ten years capital markets’ returns aren’t gonna be that good. This is clinical information – it’s neither positive nor negative. Please don’t give me the “OMG – he’s SO negative”.
Do you really think that the next ten years profit margins can look like the last ten? (See chart) 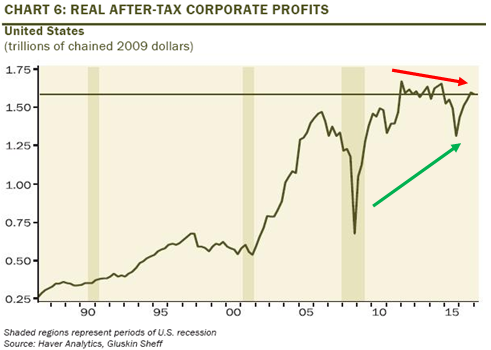 There’s nearly NO WAY that the Fed hits their inflation goal over the next twelve months based on the trends that are uber-obvious. That means that not only will the Fed not make it to 3% as a terminus on the Fed Funds rate by 2019, it means that they’ll likely be contemplating blowing the dust off of Q.E. and/or other stimulus goodies again by 2020. Disinflation and outright deflation is super evident in both goods and services now. Isn’t this clinical data running perpendicular to what the mainstream media is saying?

In the “OLD” days, the saying was, “Clip your coupons from your bonds and build your stock positions.”
I contend that today the saying should be, “Clip your gains and dividends from your stocks and build your bond positions.”
I say this because believe it or not (only time will prove this), bond yields on the longer end of the yield curve are going lower. But, but…The Fed is raising rates! They’re raising them on the short end of the yield curve, but the longer end is coming down and we’ve not entered the next recession yet and bond yields on the long end of the yield curve ALWAYS go lower in recessions. ALWAYS. 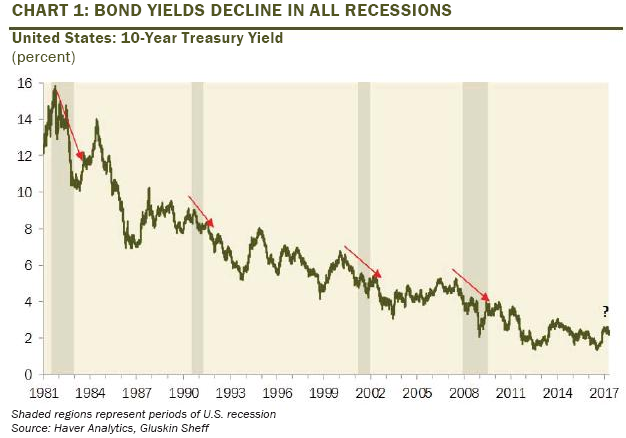 The U.S. 10 year Treasury bond is headed down in yield even as the German 10 year Bund's yield is likely headed higher.

There is a tremendous historical basis for correlation as evidenced in the chart below...(a 5 year comparison of the yields on the 10 year US Treasury compared to the 10 year German Bund).  Source:  Bloomberg

This means new money into bond positions HAS to be dollar cost averaged and done surgically and very very carefully. I have the prospectus for the iShares Core Agg Bond portfolio and it’s really hard for me to find any individual bond positions that I like at all in there.  I do have to say, however, that Blackrock has 3-4 bond ETFs that aren't all bad from a concept and strategy standpoint; I do, however, question the sell strategy.  Just like with equity investments, it is very, very important to know WHEN to sell bonds and not just hold onto them.
Investors have to face facts: passively managed funds have had virtually NO stress testing. Robotic investing works as the rising tide lifts all boats, but with the actions of monetary groups around the globe and with the effects of asset bubbles, the degree to which virtually all assets are positively correlated is scary. The financialization of investment securities has been astonishing over the last, call it three years. To use a word from the present-day teenage vernacular, it’s been “Epic.”
Now we own some passive investments, I’m not trying to negatively rubber stamp them all, but let’s put it like this, things are about to get very, very interesting.
Retirees ARE NOT prepared emotionally and financially for recession
I talk with a lot of people and not many are prepared for seeing their investments do much less for them over the next ten years than what they’ve done for them over the last ten. It is common nature to extrapolate into the future the most recent experiences and I think we all understand that.

So seriously, again - where's the inflation?  The chart (annualized three-month % change), below is the long view; from mid 2017 back to 1967 (Core CPI).  Disinflation, not inflation presently... 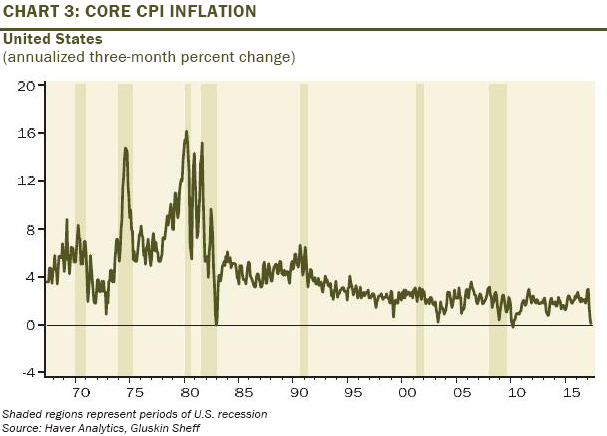 For certain accounts, with more than a double, we trimmed our John Deere shares to reduce the EPS variability in that part of the portfolio.

For certain accounts, we bought France iShares and invested in Baron Institutional Emerging Markets Fund.  France, Germany and Japan are actually seeing some renewed cyclical momentum relative to the U.S., with respect to positive EPS revisions and many of us expect big things from newly elected President Macron in France. 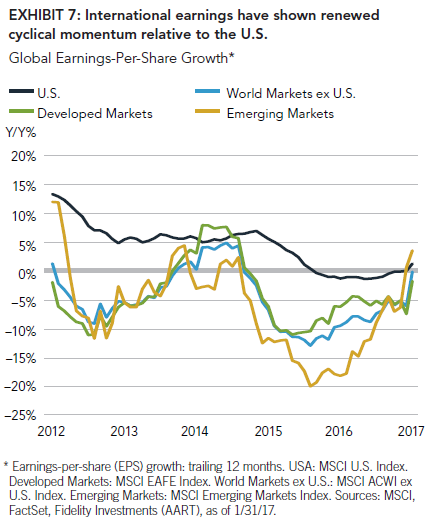 We sold our shares in Arconic.  Back in 2013, when Alcoa was kicked out of the Dow Jones Industrial Average and Visa was added, we bought Alcoa after it floundered to super-duper cheap levels (like 0.12 Price to Sales).  In 2016, Alcoa spun off Arconic and thru May those positions were up roughly 45%+ from that time.  As you may know, unfortunately, a high-rise burned in London in June.  Earlier this week, Arconic was accused of supplying some building materials that were flammable and that were in that tower.  No one is blaming Arconic for the tower burning, but the scapegoat is sometimes adjudicated in the public court of opinion and that can morph into the capital markets quickly and be a huge negative whether they're guilty or not and my experience tells me to lay low until the dust settles.  Look at Takata (the air bag manufacturer), who recently declared bankruptcy after an absolute avalanche of lawsuits.

Ensco PLC (U.K.), bought Atwood Oceanics (Houston, TX), and our Atwood bonds went up 17% overnight and for folks that were either light on Atwood or had none, we bought the 7 year Ensco's for a 9% yield.

We invested in Wells Fargo preferred stock yielding 7.75% per year.

Amazon buys Whole Foods (interesting; most likely another race to the bottom with respect to profit margins); and I have a feeling we'll get an opportunity to buy Kroger bonds after the ratings agencies lower their bond rating (just like Safeway several years back when we picked up 8% yields), to just below investment grade (story still unfolding; no action recommended yet).

This is being highlighted due to the fact that heavy consumer debt balances act as a constraint on future growth and seeing as how our U.S., economy is 68% the consumer, it matters. 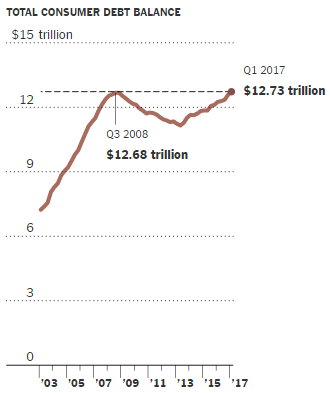 The complacency of investors and lack of historical context are going to hurt many investors.

The Fed is most likely almost done raising interest rates for this cycle (I've been saying this for some time - not really news).

The Federal Government debt ceiling is going to be an issue again before year end.

There are presently better places to invest than the U.S., (based on valuations, less uncertainty and currency tailwinds elsewhere).

People are not ready for the next recession which I think will be here fairly soon.

The Atlanta Braves are performing a lot better than I thought they would without Freddie Freeman.

I wish our country wasn't SO divided and unable to tolerate one another (from different sides of the political fence).

Clients need to construct private pensions (fixed annuity constructs), asap with us while we can still secure a 8.5% simple interest deferral rate coupled with a 5.5% payout rate that only costs 1% per year because these constructs are changing rapidly.  (Just an example)

Advisors, attorneys and CPAs are hurting their clients because they're not preparing them for interest rates staying low for a long, long time. 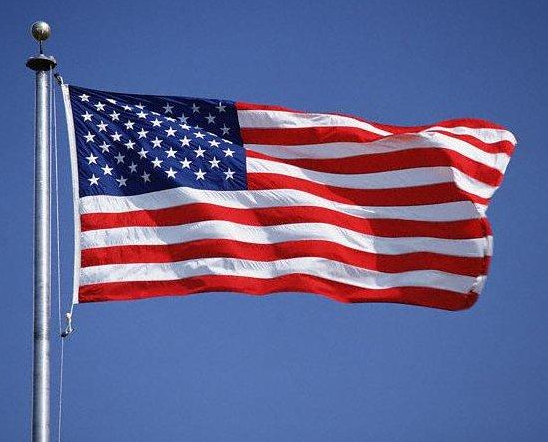 Thank you so very much and have a very, very Happy Fourth of July!  God Bless the USA! 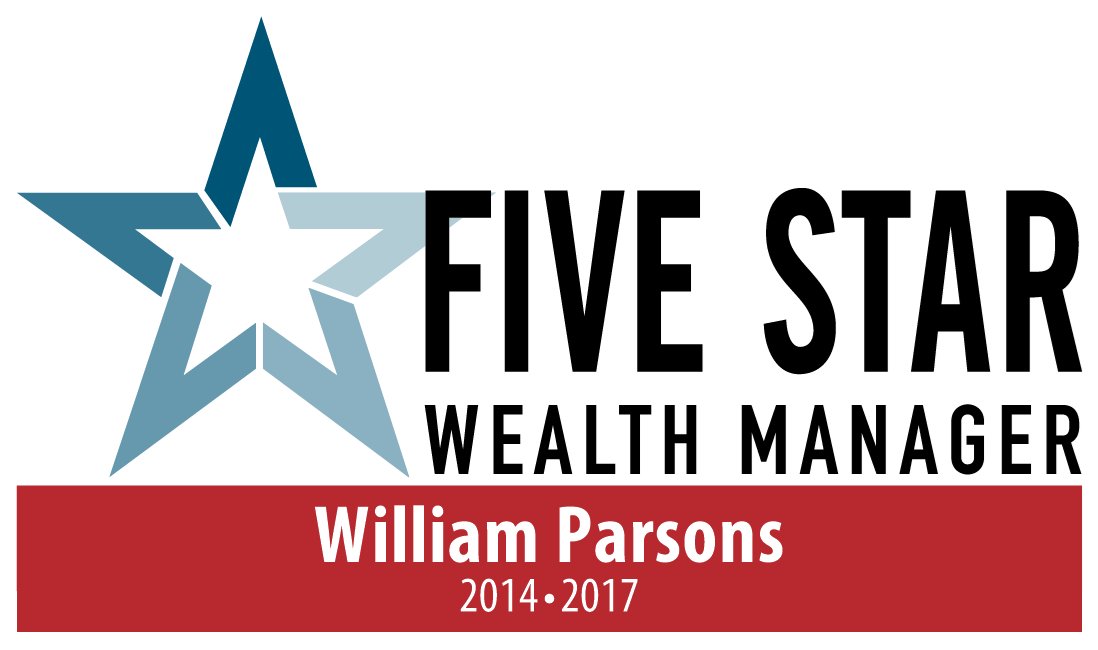