What does “normal” mean when it comes to stock and bond market returns?

All over the globe, we are seeing more military tension, economic disputes and regional conflicts than at any time since the Cold War. The rising trend in nationalism over globalization is disturbing. Despite these facts, when it comes to business, the second half of 2014 and 2015 are likely to see the combined forces of capitalism and innovation serve as significant drivers to domestic growth.

Potential drivers of growth in the United States:

Example:  Caterpillar will build a factory in Bogart, GA and expand an existing facility in Sumter, SC to create additional manufacturing jobs;

I have been receiving these three questions a lot lately:

1.      What kind of returns do you expect from stocks and from bonds?

Here are some thoughts on “normalization”, as the Fed exits Q.E., and inflation and wage growth continue to firm and increase…

We will most likely see:

Equity market corrections occurring at a normal frequency (these are historic averages):

Bond market returns will likely be modest, but positive – although many bond prices face a tough road ahead as rates normalize.

Bonds should provide significant diversification benefits and act as a cushion against equity market corrections.

There will be a liquidity problem with certain bonds at some point in the near future as treasury market yields normalize and the Fed begins to raise the Fed Funds rate, so you must have a discipline as to what you want to own and why.

Many popular parts of the stock market are trading with excessive price/sales valuations and may not see very positive performance results over the next several years so you want to avoid those parts of the market.

Example: Cisco Systems in January 2000 (was so popular then, but was then trading with excessive price/sales valuation; good stock to buy now, however, 14 years later and with a nice, growing dividend).

Our family was up in the mountains at a family 4'th of July gathering and the kids wore an American Flag hat that came from WalMart and cost $1. Where do you think it was made? Of course...China. Well, this is a chart I thought many folks might find interesting...

This is a chart of the change in real unit labor costs since Q1 2002. China's labor cost advantage is not as stark as it once was and those cheap hats may be produced in China, but the good, old, U.S., of A., is seeing our share of value-add manufacturing growth. That growth will not translate to the huge number of jobs it did in past decades due to advances in robotics, but it's still positive to GDP growth. 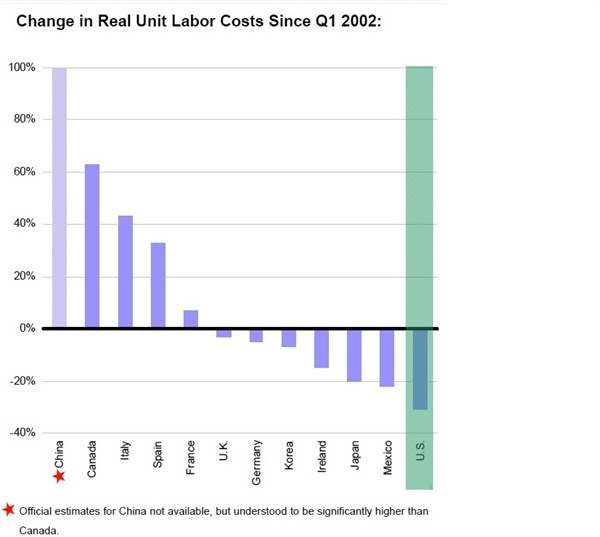 For an expanded look at “The Great Normalization”, go to: