Too Much Debt Not Enough Growth 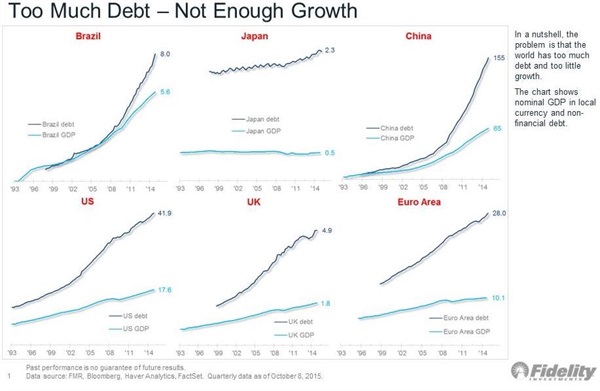 Wow.  What a bumpy ride since July, eh?  Let's maybe start out by going from the 34,000 foot view (airplane in the air (macro)), down to where the rubber meets the road with specific investments (airplane on the ground (micro))...

What's the Fed gonna do?  I get this question so frequently...

The Fed stayed on the sidelines recently and didn't raise rates as everyone knows and the main reason that they didn't is because the credit markets tightened conditions for them and they didn't have to tighten them by raising the fed funds rate.  This response was due to very soft commodities markets (energy in particular due to the steep oil price decline), China's growth profile slowing down, corporate earnings strength weakening in some cases (and severely in the energy sector), and what seemed like a possible default at Glencore> spreads on corporate credit widened out further and bonds sold off worse in some sectors than since the 2008 crisis.  It is important to note, parenthetically here, that foreign investors are plowing more money into US corporate bonds than at any time since 2008.  The stock markets needed an adjustment as well as it appears that S&P 500 Earnings per share will be lower in 2015 than they were in 2014.  Moody's downgraded more credits than at any time in 5 years, Brazil's sovereign rating got downgraded, several M&A deals with what the market perceived as having very high debt level optics were culminated, and investor pessimism was (and still sort of is), very, very high.

Credit Markets are Tightening for the Fed 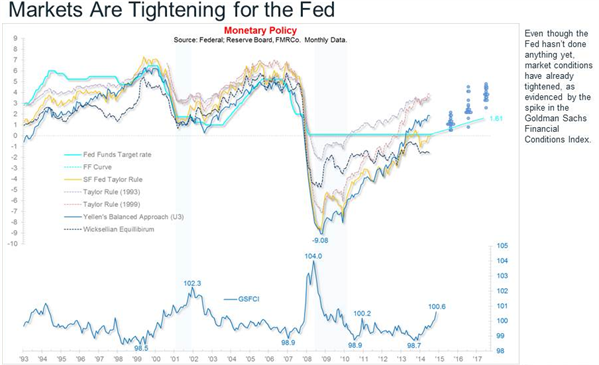 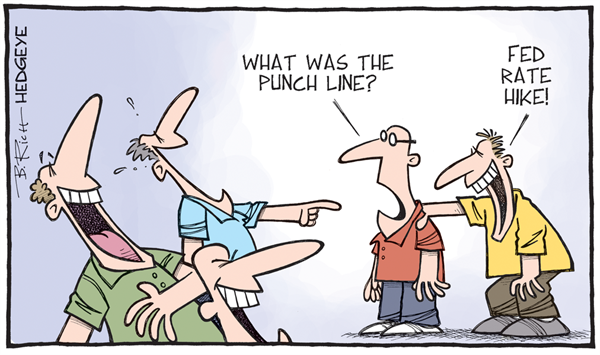 Markets are doing the Fed's job for them

Who do you know who borrows money at 0.08-0.25%?  That's the effective fed funds rate; and I don't know anybody who borrows money at that rate.  So:  1) the U.S. dollar's strength YoY earlier in the year; and now 2) the credit markets tightening significantly are signaling to the Fed that if your're gonna (the Fed), distort asset prices so severely with your adherence to ZIRP (Zero Interest Rate Policy), in the face of this much domestic economic growth, then the credit markets and stock markets to some extent, are going to re-price those assets for you.  This is concerning but it is very, very opportunistic.  The Fed is not out of ammunition as it pertains to policy measures that they can deploy to try to generate economic growth.  The tools that are remaining, however, are very untested and are not without significant risk.  The Fed missed two opportunities this year to provide an exit strategy that is well articulated and understood.

Fed may sit on the sidelines for all of 2016

The last time the Fed mentioned international market concerns as much as they did in September 2015, it was August 1998, and at that point, the fed funds rate was 5.55% and the Fed actually lowered rates then even against the backdrop of 5% GDP growth and very low unemployment.  Notably the stock market ran very hard in the positive direction and only after approx., 3 years did the recession come.  I think we'll see a similar pattern from here.  The conditions for a domestic recession are simply not here.  As I stated in July:  correction, yes; recession, no.  The difference this time, though, importantly, is that fed funds rates are not at 5.55% as they were in 1998, they're at zero.  It wouldn't surprise me to see the Fed come out with a program designed to stabilize credit markets if credit spreads don't narrow considerably by mid-year 2016 (but I think they will by February 2016 for what it's worth). 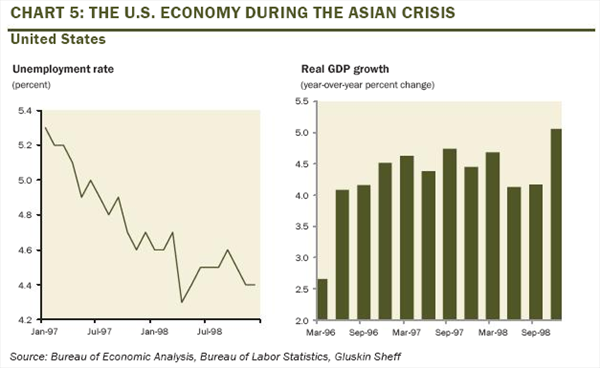 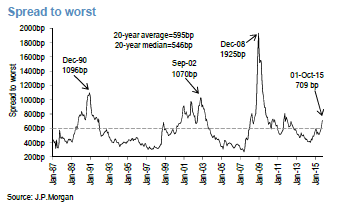 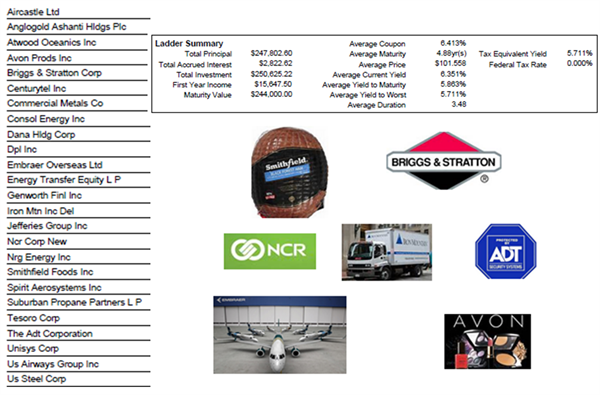 Notable data for portfolios (sample dated 10-19-15, not representative of all existing portfolios):

Have a little faith

If you are going to have "faith" in the U.S. capitalistic experiment, how about having a little "faith", in proven leaders' abilities to do good deals?  Michael Dell and Bradley Jacobs are two good current examples. 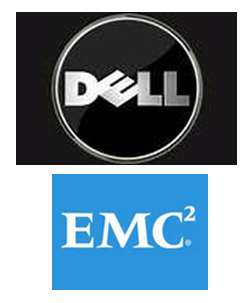 This bond yields 7.75% for 12 years.  By 2017, Moody's expects the entity to have $5B in free cash flow that Michael Dell & Co., will aggressively pay debt down and this will dramatically improve the combined company's credit profile.

...Not everyone knows XPO Logistics... 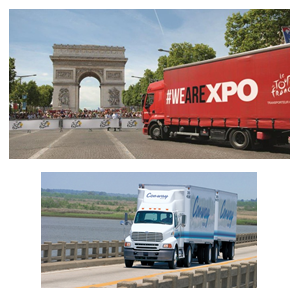 ConWay Trucking 6.7% to 2034 > These are 10% yielding bonds.  You read that right, 10%!  They just announced that they were being acquired by XPO Logistics, led by Bradley Jacobs, the gentleman who put together two very successful deals previously:  United Rentals, Inc., and United Waste Systems.  The timing is perfect for high yield investors who want to buy assets cheap and see the quality of the asset increase in value as the financial metrics materialize over the years.  Jacobs faced a ton of scrutiny and investor pushback with these previous deals, too.  He pulled together 200 garbage haulers to for United Waste Systems ans 250 equipment rental firms to build United Rentals.  The really sharp analysts that know the trucking and logistics business believe that the hybrid model of broker-truck operator makes sense.

Dried up liquidity won't kill the high yield market - it will temporarily slow down new deals to a halt (we're seeing that in new deal numbers for October), but they'll eventually resume and the Fed will most likely mention credit market conditions in one of the two of the next several Fed meeting minutes as reasons why they're still not raising rates. These are opportunities.  Just ask clients who invested in quality bonds like International Paper and got 10% a year in 2008.  This is awesome.

Remember last Insights I said, that for the farmer, it's praying for rain, and for me it's praying for higher rates? Well, like often happens in life, our prayer was answered...it just got answered in a different way than we thought it might...spreads widened and opened up opportunities for us rather than the Fed doing the work of raising rates.

"It isn't knowledge, it's humility we lack"

These are Don Henley (formerly of The Eagles), lyrics from Praying for rain, on his latest album, Cass County.  For all of you country music buffs out there, that song has Vince Gill on acoustic, Alison Krauss on harmony vocals and David Moran on hammered dulcimer (not too shabby).

I was early in my spread compression call in February 2015 (most likely February 2016 timeframe)...

I advised a group of investment advisors around the U.S., and Canada in February of this year that we'd see corporate bond spreads compress as they economy improved and I highlighted at that time Olin Corp., BB+ rated bonds (6.5 years from maturity), that at that time yielded 5.215%.  Well I was wrong - I was early on my call - most likely a year early.  Today, you can pick up 6.5% from those bonds with the recent softness in credit markets.  The price of the bonds is 8.06% cheaper no since the February purchase for some accounts, but the corresponding stock is down 27%.  This is why it makes sense to sometimes go up the capital structure.  This means to invest in the bonds of a company rather than investing in the corresponding stock.  It doesn't always make sense to do so, but when you're managing risk, it's important to be able to know how to do so and if it makes sense or not.  Not all parts of the bond market will be safe so if you don't know what you're doing, trying to make money in bonds will hurt as the Fed embarks on their ascent (at some point), to ~3.5% terminus on the Fed funds rate.  Additionally, if stocks run like I think they will for the next 2-3 years, it won't be obvious why going up the capital structure makes sense, but when the next recession hits in a few years, you'll be glad you had some exposure to things like OLN bonds and not just OLN stock.

So invest in these securities when they are on sale and when markets are volatile rather than when things have settled down and they're "retail" price. 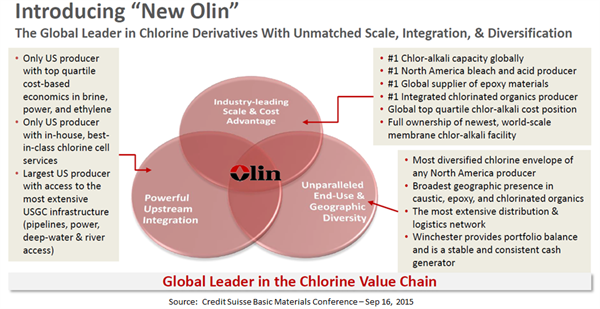 "I'll take Houston over Switzerland for 12%, Alex".  This is my metaphor for choosing Atwood Oceanics 2020 corporate bonds over 2020 Transocean (RIG), bonds.  Why would I do that when the Transocean bonds are more highly rated by Moody's?  Let's drill down into the numbers and see why...

Boeing has developed a new type of metal structure so light it can be placed comfortably on the top of a dandelion without disturbing it.  Apparently, the material has walls that are 1,000 times thinner than a human hair!?!  What?  Wow!

Metal as light as a feather...Microlattice 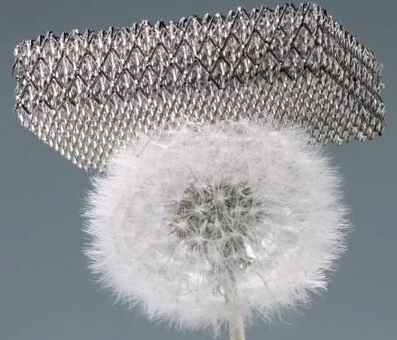 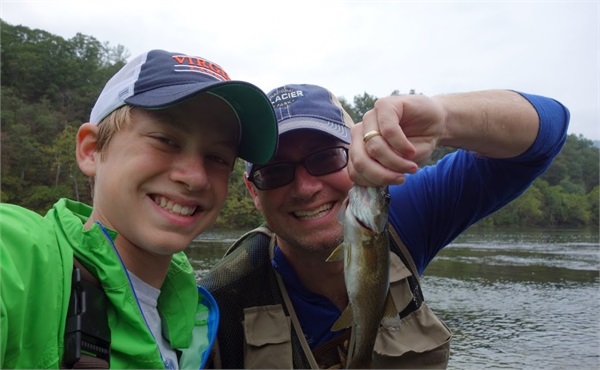 Picture of my son (now 13 years old), and I fishing for smallmouth bass on the Shenandoah River in northern Virginia.

If we stay invested we have opportunities to make money over time.  If, however, we try to time the market and we miss the twenty best trading days over twenty years, our rate of return (as defined by the S&P 500), gets whacked by 2/3!  Ouch... 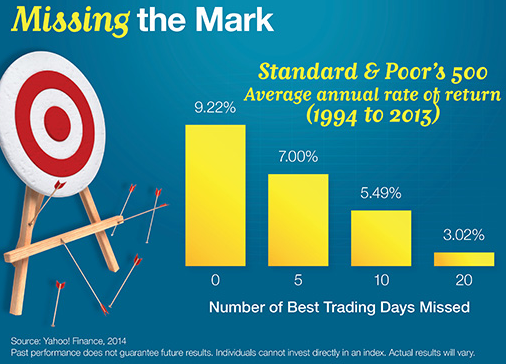 I sincerely hope that your health, your family, and your business all go splendidly well throughout the rest of 2015.  2016 will bring about a whole new set of challenges but with them, a whole set of opportunities as well.

I have a great job and people like you make it possible.  Thank you so much for your business / your interest in how our company can help you and your family.

All the best! And Happy Holidays!!! 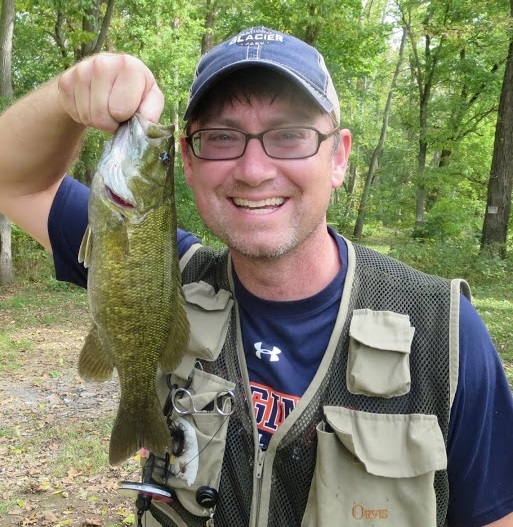