Welcome to the Casino!

Greetings!  I hope that your Summer is going wonderfully well and that you and your's are feeling clear-minded, and strong and healthy despite the challenges brought on by the Covid-19 virus, the shutdowns, the lockdowns, the senseless physical brutality, the dishonoring of fellow citizens and human beings, and the sharp divisiveness in our country and also around the world.  I imagine that there have been times recently that you, like me, have hung your head sorrowfully and asked aloud, "Why?"...and maybe even prayed, "Lord, please heal our land."

If you're a pre-retired client, a retired client, or someone considering becoming a client, I thought it best in this edition of Insights to provide a general update of financial market conditions as I see them as well retirement planning updates and some things to consider in the months and quarters and even years ahead.

SO MUCH has happened...

By way of review, overall, Corporate balance sheets (some exceptions of course), BEFORE Covid-19 were not in great shape and most corporations were already saddled with a TON of debt.  As you may know, much of that debt was used to buy back shares of their stock to promote earnings per share growth.  In addition, valuations on popular growth stocks on a price to sales basis were really, really expensive.  And lastly, many individuals and corporations simply did not have enough of a cash and savings cushion to weather even a few months of an economic shut down.

The leadership decided that the best way to deal with the Covid-19 outbreak was to SHUT EVERYTHING DOWN.

Our $22 Trillion economy was not designed to simply shut down.  Well, it happened anyway.  Leadership gave away public funds in droves (and is continuing to do so), hoping to keep entities solvent first and secondly to stimulate the economy.  We're in the middle of a deflationary bust.  The hit to demand is a hole that the Federal Reserve simply cannot fill despite it sometimes seeming like they can due to huge, bear market rallies in the stock market. They can loan money directly to companies but they cannot force those companies' customers to buy goods and services from them.  The U.S. Treasury can send $1200 checks to individuals all they want, and even adopt a universal income policy, but these programs are what Dr. Lacy Hunt appropriately calls, "Unproductive Debt".  "Productive Debt", would be debt used to invest in things that can generate future income streams and/or future economic value like debt used to finance the expansion of the railroads out west allowing industry and people to start and build communities.  Unproductive debt would be debt that is used to simply pay down other debts or to pay for leisure activities or consumer items like iPhones - debt that doesn't really stimulate the overall economy.  After all of the 'stimuli' fumes settle, the capital markets (both stock and bond markets), disconnect from the stark reality of a damaged economy will have to be reckoned.

"We need to consider that all of these government programs are only bridge income replacement support mechanisms. This is no FDR New Deal stimulus, when we built the Golden Gate Bridge, the Hoover Dam, the Lincoln Tunnel, and Route 66.  This is not fiscal stimulus with any future multiplier impact or payback.  It's simply government assisted life support."  David Rosenberg - Rosenberg Research - May 11, 2020

As we all know, stock market prices can be disconnected from the actual economy for extended periods of time.  This especially happens when the government intervenes in what are normally 'free markets', meaning price discovery normally is 100% determined by the supply and demand of buyers and sellers of securities.

Be careful with stocks; if for no other reason than because of still-high valuations

Be careful going along with the herd and paying more and more for share prices tied to companies that had record level profit levels before Covid-19 (and that were historically expensive before), when for the most part the insiders at these companies are net-sellers rather than net-buyers and whose businesses are so damaged in many cases that they're not giving Wall Street any earnings guidance.  And you want to continue to bid their share price higher?  That's a casino. 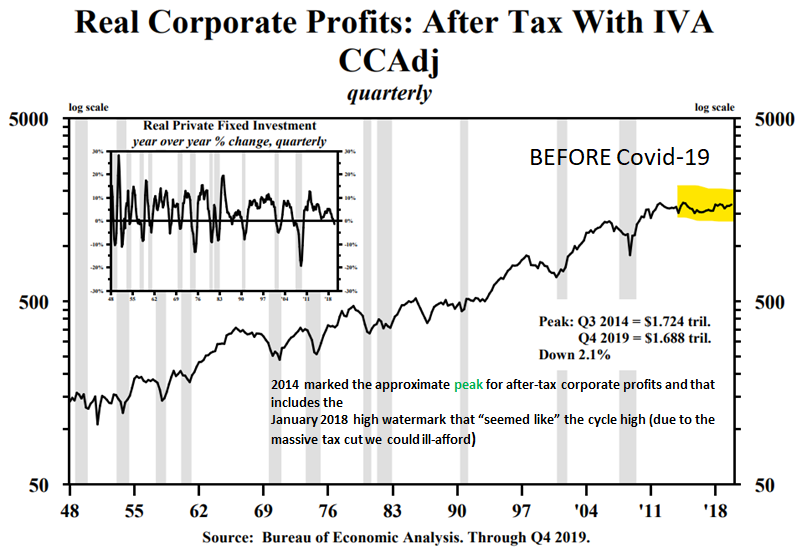 Portfolio adjustments notes from my clients-only letter in May

Municipal bonds
New Jersey student loans;
New Jersey Econ Development bonds that are Investment Grade on a stand-alone basis, but are due to be downgraded in my estimation;
Connecticut real estate development bonds that are uninsured;
Tennessee Energy Acquisition Corp Natural Gas bonds (long term (short term that matures next year is okay);
Two uninsured hospitals in Kentucky and Georgia;

Bought Olin Corp bonds at 7% per year for 7 years (maker of Winchester ammunition (been around since 1866 and company has paid a common share dividend for each of the last 347 quarters (that's 93 years)).  I'd like to see them slash their common dividend, but don't expect them to totally zero it out.  That'd be VERY bond-holder friendly by the way, as all of these common dividend cuts we have seen thus far, which I mentioned months ago, have been/will be.  I'm aware of the bonds' BB rating and believe that B+ will prove to be the ratings trough for the issuer (if they get downgraded that far, they may not, but I'm planning on that happening).

You see, when we have recessions people have to realize that we have a troughing of credit quality after a period of peaking (during expansions)...

Another example of this is Spirit Aerosystems bonds (Wichita, Kansas based Aerospace corp that is INTEGRAL to Boeing).  In other words, you can't have Boeing without Spirit.  Don't confuse this Spirit with Spirit Airlines.  They're not related.  Back in 2009, Spirit bonds ratings troughed at B+ and I think they'll rest there (still BB rated, but won't be long), but they got all the way to BBB before all of this (their peak during the past expansion), and we got 11%+ for three years with them (recent purchase of 3 year SPR bonds).

I like the munis we have.  To restate, I sold nearly all of the uninsured hospital bonds I don't like (I don't like many of them at all), because they had no cash money cushion before all of this, much less when all of the elective surgeries started going away.  Hospitals are losing money at the rate of $50B a month.  I do not like most of the Nasdaq 100 stocks (a few exceptions, though, and I do like some of their bonds), right now and trimmed the last remaining Microsoft positions by at least 50% as I think the popular Nasdaq 100 names will be dead money for 10-15 years pretty soon.  These valuations are insane..  Seriously.  Please don't forget that Microsoft traded sideways for 16 years after it peaked around $58.38 on December 31, 1999.  It took until August 19, 2016 for the stock to hit $57.62.

As you know, I like investments that generate income, so I want to own equities that I believe in the valuation and their dividend and as you know I'm partial to bonds, but especially right now and I am very interested in being in the right tranche of debt in the right year and not just in love with a name or a story or some perceived value.

There is a HUGE 'size bias' currently.

I wouldn't give you two nickels for DE debt.  But I'd love to have Toro.

Bottom line:  (for emphasis), IF FOLKS THINK THAT COMPANIES SUCH AS JOHN DEERE WON'T HAVE TO DEAL WITH THEIR HUGE DEBT ISSUES (AT SOME POINT IN TIME), JUST LIKE BOEING DID (granted Boeing had issues before all of this, but things being shut down really pushed them over the edge), THEY'VE GOT ANOTHER THING COMING.  Example:  Budweiser.  Shares of Budweiser after they accrued $100B in debt, had to slash their common dividend by 75%, and their stock is still down -67% off of the 2016 peak.

But....my Toro bonds will be just fine (even with a debt ratings downgrade, which I would welcome because I could get em thru a 6% fairly confidently).

The US is becoming Japanese in a capital markets sense.  Don't kid yourself.  Interest rates are going lower, and when the Fed said this week two more years of zero, it most likely means five.  Also, bank stocks in the US are priced around, let's call it, on average 2.2 x price to sales.  Deutsche Bank is around 0.7.  Don't think this can't happen here.  Low interest rates affect what is called Net Interest Margin at the banks in a MAJOR way.  This is negative for their NIM.  Low interest rates also greatly impact supply / demand dynamics in ways you can't imagine for good bonds.  It's scarcity (I know, I've said this for years and years), and if you want dependable income from your bonds above 0.15% you've got to act and not just be thinking about the stock market.

IF the policies of the United States don't completely destroy our American exceptionalism, and I'm not convinced they won't, we'll be looking at cost-push stagflation (several years away), in a way similar to the 1970's where the interest rate caps the Fed has been deliberating in recent meetings actually become policy.  As a reminder, this is not without precedent.  We had them in place from 1942-1951.  That's one reason why I'm UBER-careful with duration (bonds with long maturity dates), at present.  More on stagflation some other time, right now, just remember, we've got a deflationary bust on our hands and the fumes and clouds of all of the government stimuli is clouding your view at present as the financial media keeps preaching a "V-shaped recovery".  Nope. 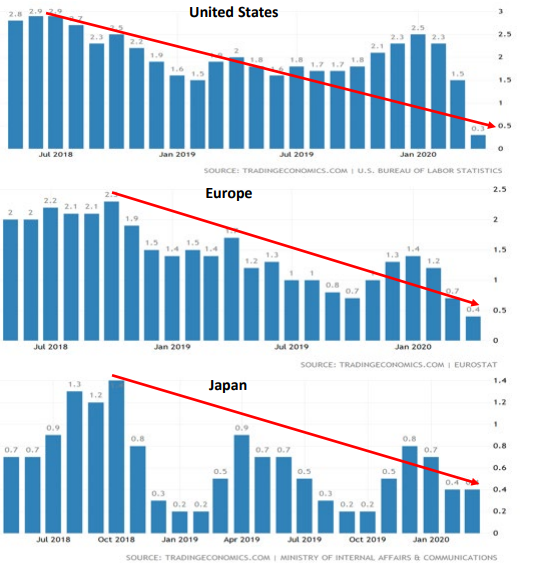 History may not repeat, but it sometimes rhymes

Please, please, please do not forget your history of market performance.  In both 2000 and 2008 we had two strong retracements by the stock market; i.e.,  bear market rallies, (circa 2000 shown below), and yet, afterwards, we still experienced a 50% drop.  Please be sober on this fact. 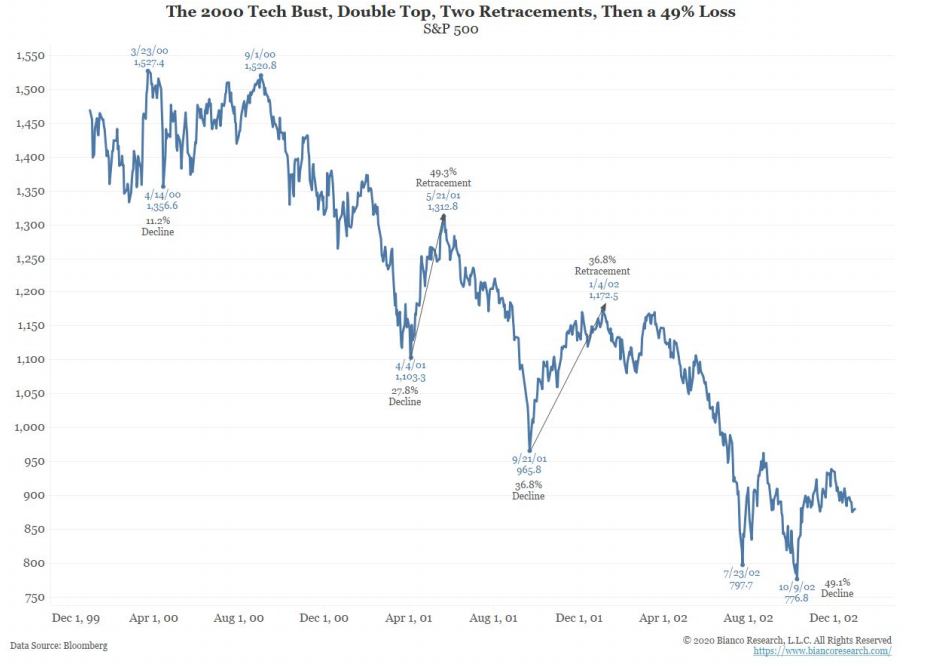 "Let's go back to the fourth quarter of 2018.  You had the worst quarter since the Great Depression and there was nothing going on in the economy that would account for it.  And this is really the result of a lot of leverage in the system, and the machines.  The machines, they know everything about price.  They know nothing about value.  So there are certain things that they trigger off of they buy, and there are certain things they trigger off of, they sell." - Leon Cooperman - May 21, 2020

If you're a prospective client, please know that it's likely that dependable dividends and income will become even more scarce and to that end, I'd invite you to schedule a call to discuss our 1) sustainable income; and 2) bond alternative investment strategies that serve as both income now and income later income sources.

As always, I thank you for your business.  I have a great job and people like you make it possible.

Happy 4'th of July, everyone! 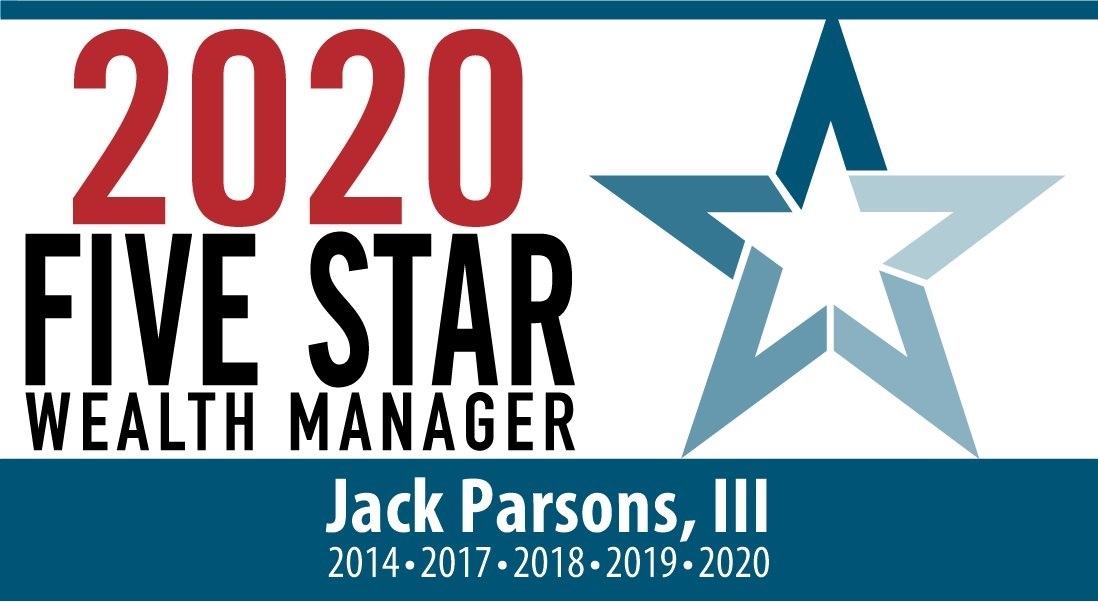